Posted on Monday 23 November 2020 by Gareth Prior

As we continue our look at archive Blackpool tram images as part of “Picture in Time” we now move on to 1993.

The below photo shows Boat 602 in its Handybus Yellow and Black livery as it heads past Ocean Boulevard at the Pleasure Beach having just terminated with a service which is likely to have come from North Pier or Bispham. With the sun shining it is sure to have been a popular ride for many and the likelihood is that when it heads north again it will be similarly popular. If you used your 2020 knowledge of the Blackpool Tramway and the layout of track you may be confused by just what 602 is doing here as it has missed the only entrance to the loop today. But in the old layout the tram could carry on to the other end of the loop and then enter it from there, which is presumably what 602 is doing. Today 602 is better known as 227 having reverted to its pre-1968 number and has received a coat of red and white paint as well as the name Charlie Cairoli. 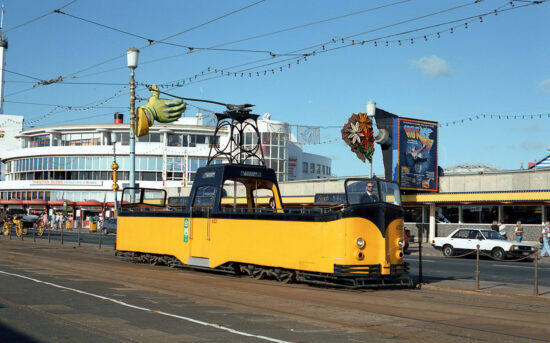