Posted on Thursday 29 October 2020 by Gareth Prior

We continue our series where we see a tram in service during 2020 at a time when passenger numbers were still at low levels with another trip to Edinburgh.

One of the things which has been seen as a result of the pandemic has been a reduction in advertising as companies cut their cloth accordingly with people’s spending habits having changed in this oddest of odd years. That has definitely been seen on tramways with very few new advertising contracts let (although that is starting to change in Edinburgh) and some of those which were in place beforehand expiring and not being renewed. Having had a period where all trams carried adverts, the full fleet livery of Edinburgh Trams has been very much in evidence once again. 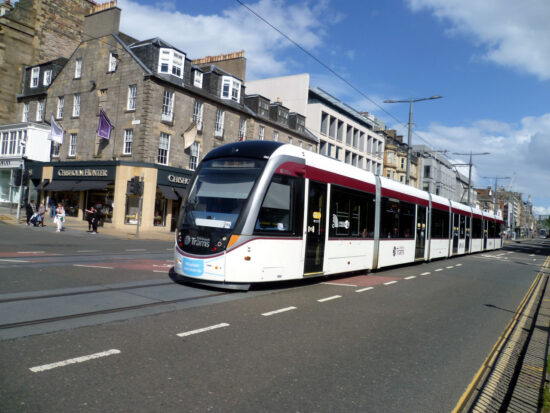 In this photo we see 262 on Princes Street running westbound with a service heading to the Airport. While adverts may have been removed from the tram it has had the added face mask vinyl affixed to the end of the trams. The corner of Frederick Street is seen on the left of the picture and the modern looking building is the home of Primark in the city. For those counting this was day 150 since lockdown restrictions were introduced in Scotland. (Photograph by Roy Calderwood, 20th August 2020)