Posted on Friday 16 October 2020 by Gareth Prior

This week we bring to an end our brief look at the early days of the East Anglia Transport Museum and the arrival of trams with Glasgow 1245 now in position.

This below colour photo shows the scene at the East Anglia Transport Museum shortly after Glasgow 1245 had arrived from Leicestershire at its new home. The Glasgow car has been placed on the extended length of track we saw being installed a couple of weeks ago and is placed in front of London Transport 1858 with Lowestoft 14 alongside. With this image taken around 55+ years ago things have changed considerably at the museum but of these trams just 1858 is currently operational with Lowestoft 14 under restoration in the works there whilst 1245 has ended up back in Scotland at Summerlee (via Blackpool!) where it is also under restoration. 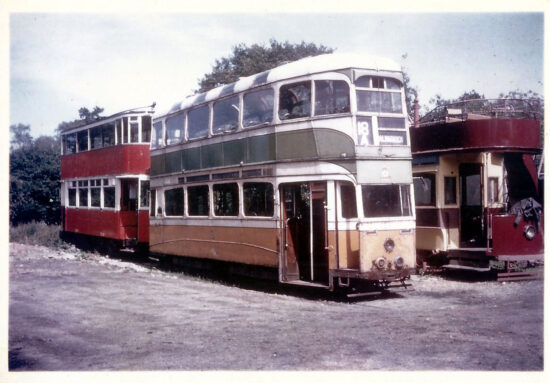 This entry was posted in East Anglia Transport Museum, Picture in Time. Bookmark the permalink.