Posted on Tuesday 15 September 2020 by Gareth Prior

It was due to start this month and work has now begun on the demolition of Wilkinson’s in Blackpool – one of the last major obstacles to overcome before trams can start running on the extension of the tramway to Blackpool North Railway Station.

As we have mentioned countless times over the past few years the Wilko’s building is located where the new tramway terminus will be located, along with the site of a new hotel complex. When the rails were installed on Talbot Road Wilko’s still firmly remained in situ with the company waiting for a new location in the town before they could move. In the event this new location wasn’t going to be ready for some time and the business closed earlier this year in preparation for this demolition work.

The demolition of the building is now expected to take the remainder of the year before progress can continue on other aspects of the Talbot Gateway project – including the tramway. The whole project is due to be finished in 2022. 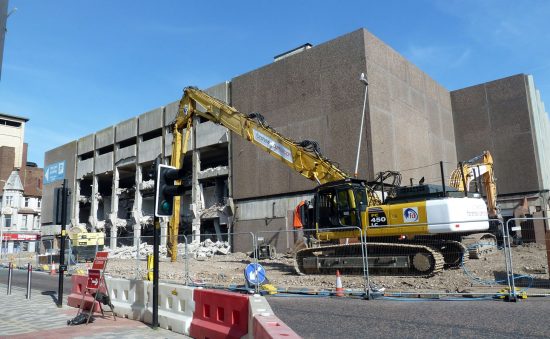 Work now started on raising the old Wilko’s building to the ground as seen in this sunny view. (Photograph by Peter Dockerty, 14th September 2020)