Following the news that Blackpool Balloon 701 will be used on Blackpool Transport’s heritage tram service during May, even more good news can now be revealed – sister car 723 is also set to join the heritage tram fleet and will be back in service during May as well! Both of these trams are being prepared to provide some extra variety and interest for fans of Blackpool’s traditional trams; yet another surefire sign that the company is committed to making a success of the heritage aspect of the tramway operations.

As previously announced, Balloon 701 is scheduled to carry passengers over the May Day Bank Holiday weekend for the first time since November 2010, having been used as a snowplough car over the winter months. The tram is set to make its debut as a heritage tram on Sunday 5th May, and will also be used on Monday 6th May. This weekend should be a good one as Brush Railcoach 631 is also expected to be relaunched on Saturday 4th May, provided its green & cream repaint is completed in time. Both 631 and 701 will hopefully operate together on the Bank Holiday Monday to give a welcome reminder of the time when Brush and Balloon cars ruled the rails, not so many years ago.

The Spring Bank Holiday weekend (25th – 27th May) should be equally exciting as Balloon 723 is due to run again. This was the first Balloon car to be refurbished with low-voltage equipment back in 1993, and in this guise it was a regular performer up to the end of the 2011 illuminations, when it was placed in store due to the tramway upgrade. At one time it was thought that 723 would be subjected to centre platform modifications, but the fact that its underframe was not substantially rebuilt led to this idea being dropped and instead it joined 701 as a snowplough car last winter, although it was never actually called upon. Now, the tram will run again on heritage tram tours, retaining its rather drab all-over vinyl advertisement for the Sands Venue, although of course there is every possibility that the car may be repainted in a more suitable livery in the future, particularly if its comeback is well received by enthusiasts.

With ‘B Fleet’ Balloon cars rostered to operate on specials over both Bank Holiday weekends in May alongside the genuine heritage fleet, this should be a great time for tram enthusiasts and our readers are encouraged to support the venture if possible. Another welcome, if slightly surprising move, is the abandonment of the heritage tour timetables, meaning that the trams will run a greater variety of journeys. As at Easter, the day’s workings will begin and end with a run through to Fleetwood Ferry but apart from that, the trams will be directed around by an Inspector. Whilst this may make planning tram riding more difficult, for those of us who enjoy the ‘bash’, this is a very welcome move, and should be more like the ‘good old days’ with the unpredictability of the tramway of old, which many of us thought had gone forever. The use of heritage trams in this manner was widely praised over the Easter weekend and presumably this has prompted this change, which will hopefully meet with similar approval. 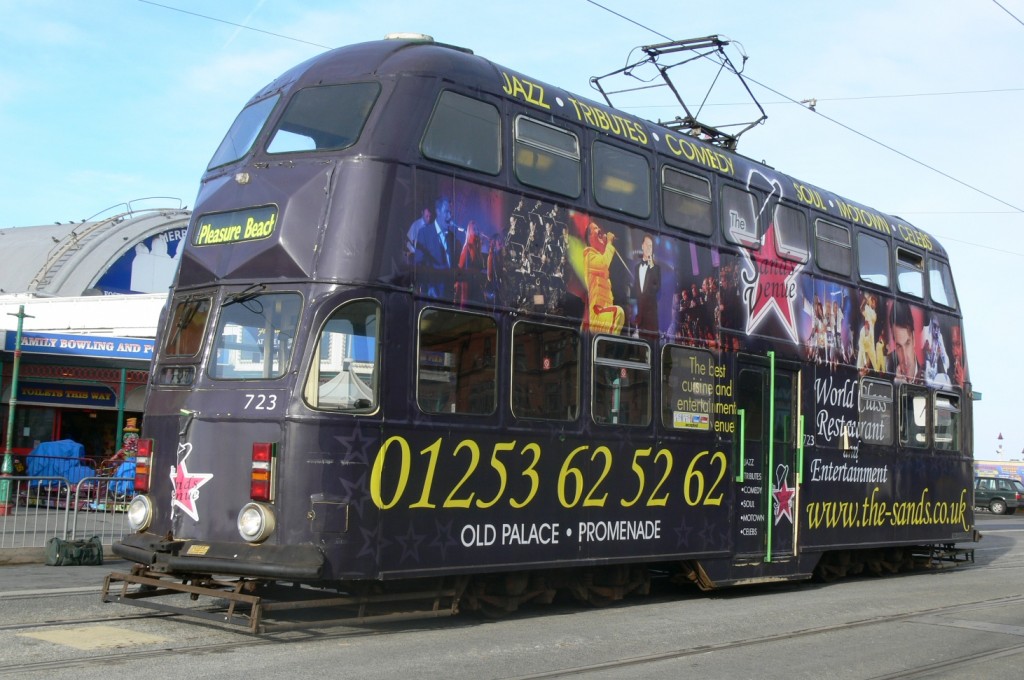 A scene which was, at the time, not expected to be repeated: Balloon 723 outside the North Pier on what was its last day of normal passenger service, Saturday 5th November 2011. (Photo by Andrew Waddington)