Whatever Happened To? Blackpool Frigate 736

Posted on Thursday 13 August 2020 by Gareth Prior

In this penultimate instalment of this edition of “Whatever Happened To?” we take at the second of the illuminated feature cars to run during the final weekend of traditional tram operation, the illuminated Frigate.

736 would run over both days of that final weekend with two tours run on both evenings. It was a pretty standard pattern for the illuminated trams with 736 the second tram out both nights (following on from the Western Train) and then running tours two and five of the night. It ended up returning to depot shortly after 2100.

As with the Western Train, 736 has remained a key part of the operational tram fleet ever since being used on an almost nightly basis during the autumn illuminations as well as at selected other times. It too, like the Train, was taken out of service at the end of the 2019 season for some workshop attention and once more like the Train is still under attention with the work having been delayed as a result of the pandemic. 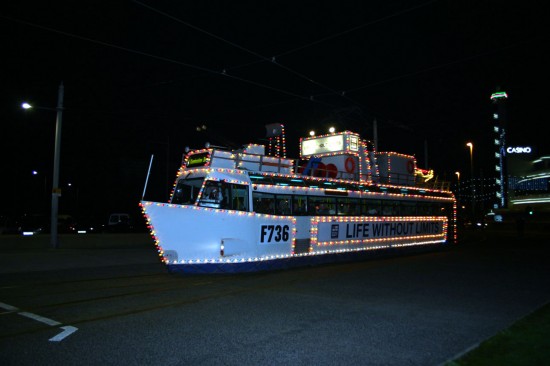 6th November 2011 and the Frigate arrives onto Pleasure Beach loop at 2037 when operating its last illumination tour of the traditional tramway. 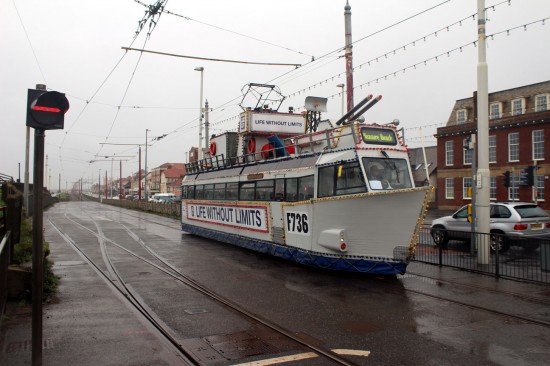 Even an illuminated tram in wet weather conditions doesn’t always lift the gloom! On one of its daytime outings, 29th September 2019, HMS Blackpool approaches Bispham with a heritage tram tour. (Both Photographs by Gareth Prior)