Whatever Happened To? Blackpool Balloon 715

As we continue this series we now take a look at Balloon 715, a tram already preserved by 2011 and one which has remained under the ownership of what is now the Fylde Transport Trust ever since.

Whereas every other Balloon Car we have seen in this series so far was to become a “B fleet” car, 715’s career is very different as it has remained completely in the traditional shape with no added bulges to allow it to run with the platforms. In 2011 and Saturday 5th November saw it allocated to an afternoon and evening private hire on behalf of the Lancastrian Transport Trust (along with Standard 147). The following day and there was no public service outing with the tram used on a tour from 1430 for the Fylde Tramway Society where it has Twin Car 675+685 for company. Although my notes have let me down (obviously wasn’t at Manchester Square at the time!) it would have returned to depot at around 2200.

Today 715 is owned by the Fylde Transport Trust and has enjoyed almost constant use since 2015. It received a repaint in 2019 which saw it to return to the 1970s complete with period adverts and is scheduled to receive further workshop TLC over the coming years to keep it running. Always possible with enthusiasts (as the only unmodernised and operational second series Balloon), 715 can often be found in use on Heritage Tram Tours. 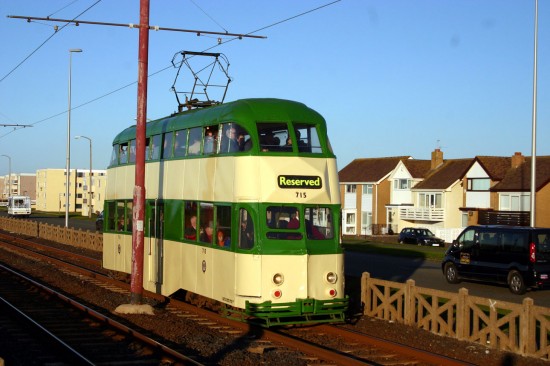 A packed 715 is seen on 6th November 2011 during its final tour on the traditional tramway as it passes Norbreck North with a southbound journey. 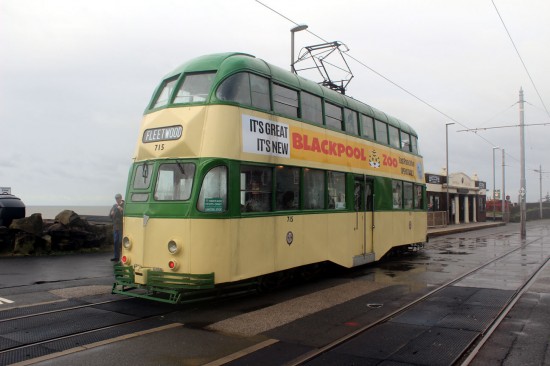 Moving forward to 2019 and the tram had returned to 1970s green and cream (having spent a period in 1990s green and cream, the two schemes not being considerably different). It had also received period adverts between decks with different companies on each side, this side showing an ad for Blackpool Zoo. This is 29th September 2019 at Bispham with the tram off to Fleetwood. (Both Photographs by Gareth Prior)