Today its time to head to Blackpool again for a look into the archives with Coronation 660 featuring this time around.

A skateboarder heads on by not seeming to notice (or maybe even care!) that they are just passing what was at the time of this photo the only operational Coronation Car in the Blackpool fleet! This is 660 close to the Tower in October 1997 with a small smattering of passengers on board as it heads south along the tramway. 660 – as 324 – was the 21st Coronation to enter service in August 1953 and would lose its VAMBAC equipment for conventional controllers in 1967. Retained as the sole Coronation Car when the rest of the class was withdrawn from service it would continue to fly the flag for this popular class up until the time 304 was restored to service. Both cars are out of service again and 660’s chance to shine again remain some way off with 304 the more likely example to return to action in the future. 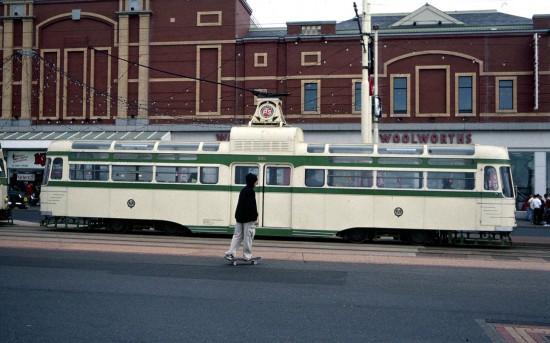