Included in this edition of “Trams &” we see a bus previously featured in this series plus an additional bus and, of course, a tram.

This photo was taken at what we now know as the Crich Tramway Village and shows popular preserved tram Leeds 602 heading along the museum street with this photo taken adjacent to the depot yard. 602 is a tram which has spent more time out of service than in and with its unique VAMBAC equipment, believed to be in close to original condition, it is destined to remain a static exhibit so as to conserve rather than operate in the future.

On the right we see two buses with Midland General 296, a Bristol MW5G which entered service in May 1965 and has since been preserved and restored to its original condition. It is followed by another Bristol MW5G bus, Bristol Omnibus 2572, which we have seen featured in this series before. 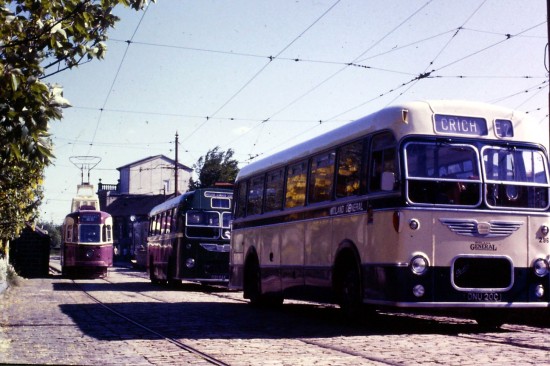