Posted on Thursday 7 May 2020 by Gareth Prior

In this week’s look at remaining relics of the UK’s first generation tramways we are off to Hull where we find a surviving length of Hull Corporation Tramway’s unusual centre groove track.

The below images were taken on 20th August 2010 although ten years later it is believed the track does remain in situ today. They were taken from the main Anlaby Road thoroughfare and this section of track formerly gave access to the Wheeler Street Depot that had been built for the opening of the electrified Anlaby Road route on 5th July 1899. This tram track had run parallel to a double track railway that was a cut off route linking the main line into Hull to the Bridlington line and so avoiding the need to reverse in Paragon station if not calling there. 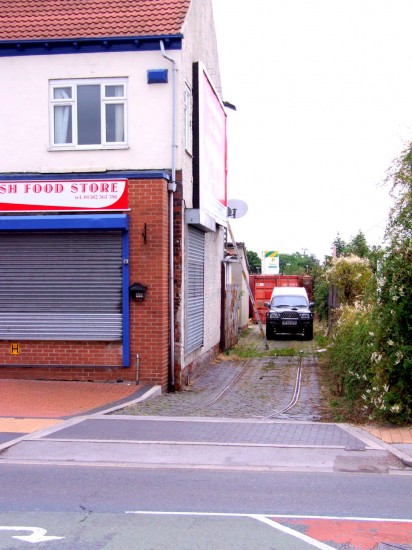 These two photos show the track remaining in situ just alongside a shop on Anlaby Road. (Both Photographs by Mike Haddon, 20th August 2010)