For the next few weeks we will be visiting Beamish for a series of images taken at the museum in 1996 showing the trams as they were 24 years ago.

The first tram in this batch is Newcastle 114 – a familiar sight for regular visitors to the museum. An A class tram built in 1901 the tram was initially, as it again today, an open topper but underwent several rebuilds during its lifetime before being sold to Sheffield in 1941. Renumbered 317 in Sheffield it would remain in service in the South Yorkshire city until 1951 when final withdrawal came. The tram then trod the very familiar path of being sold on for further use, discovered some years later and then restored back to being an operational tram once more! 114 arrived at Beamish in 1987 and following an extensive restoration was returned to service in May 1996.

Just a few short months later – 16th August 1996 to be precise – and we see 114 at Beamish with a full load of passengers on board. 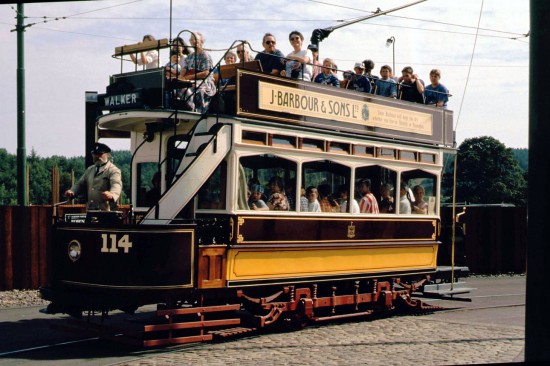