Posted on Tuesday 24 March 2020 by Gareth Prior

A lot of the remnants we have featured in this series have been old tram depots or fixtures and fittings on buildings where overhead has once hung. But this time we will be taking a look at some surviving track in Darwen, Lancashire now preserved for posterity.

The Lancashire town of Darwen was at the south western extremity of a series of 4’ gauge tramway routes which led all the way through Blackburn, Accrington, Haslingden and Rawtenstall to Bacup. It was said that although several changes of tram were necessary to make the full trip that it was the longest continuous journey possible by steam tram in the country. The first tram route opened in Darwen in 1881 and this was the first steam tram route in the country, operated by the Blackburn and Over Darwen Tramways Company.

The southern terminus of the route was at Whitehall and although suggestions were made for extensions across the moors to join with the Bolton system at Dunscar this never happened. As a result a turning triangle was built in order to turn the steam trams and this still survives to this day as a scheduled ancient monument. The tracks are in traditional stone setts and a faded mural also features on the wall of the adjacent Tramway Café. Inside the café and as well as excellent food and drink there is a small collection of tramway photographs and memorabilia including a staff uniform. 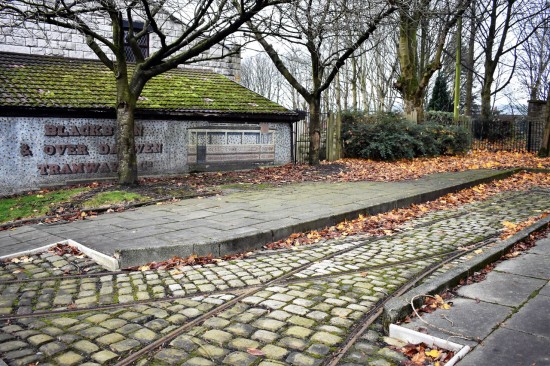 The preserved steam tram turning triangle at Whitehall. The single-storey building with the mural is the Tramway Café, while the building behind is clearly recognisable from photographs of the same location in steam days well over one hundred years ago. The Blackburn and Over Darwen Tramways Company obtained steam tram locomotives from both Kitson and Thomas Green, with Kitson supplying six for the opening of the tramway in 1881. The locomotives with their double-deck trailers would have waited on the triangle before returning north. 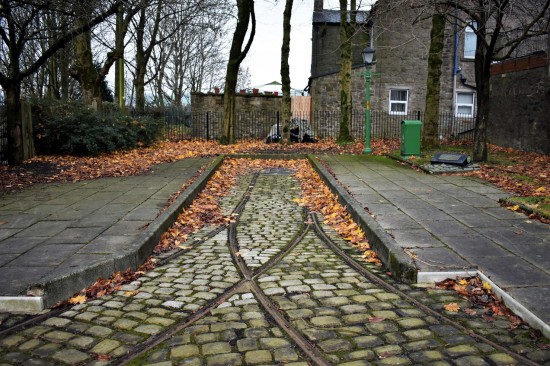 The preserved triangle looks a bit like an empty stage set. The tracks continue under the paving at the end of the triangle, where the start of the boarded-over ash pit can be seen. It’s a pity the modern paving and kerbstones could not have better matched the alignment of the curved rails. (Both Photographs by Donald Brooks, 22nd November 2018)