Posted on Thursday 19 March 2020 by Gareth Prior

Its off to Blackpool in 1984 again for today’s “Picture in Time” and in this instalment we are taking a look at another of the iconic Balloon cars.

As with the photo we included last week we see a tram rounding the Metropole Hotel heading south to Starr Gate with Balloon 717 the tram in this image. On 8th July 1984, 717 was in the attractive 1980s green and cream fleet livery and it is operating on route 9 on this day as evidenced by the card in the side cab window. A between deck advert for the Co-Op 140 Exhibition features as does a trolley. It’s a warm day in Blackpool with saloon windows on both decks open and the crew seem to be getting ready for the stop at North Pier as the doors are being opened. Also of note is the almost complete lack of traffic on the road.

Of course, 717 is now very much part of the heritage fleet in Blackpool having gone through an overhaul which saw it returning to an approximation of original condition plus a few modern additions. 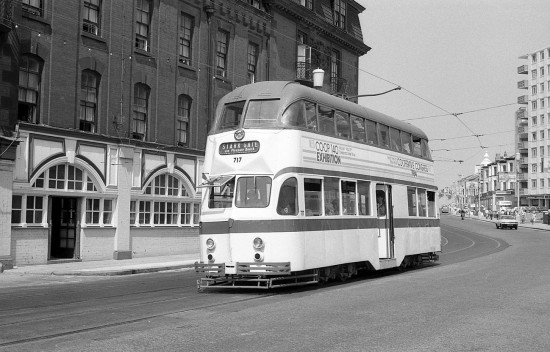