We are again on the Isle of Man in the 1970s for this week’s traditional tram archive image with the Snaefell Mountain Railway again featuring.

Having been down at Derby Castle Sheds last week to see one of the car under maintenance we are back at Laxey this time around and see Snaefell Mountain Railway 5 having just departed the station and starting the ascent to the Summit. It looks like there is a fairly healthy load of passengers wanting to see the views from the top of the mountain – how many of the seven kingdoms will they see when they get there?

No. 5 had suffered a fire in August 1970 which severely damaged the car and a full rebuild was completed (reusing the frames and trucks of the original car) allowing it to return to action in July 1971. This image comes after the rebuild in 1979 as the newly rebuilt 5 had no clerestory as seen in this image. 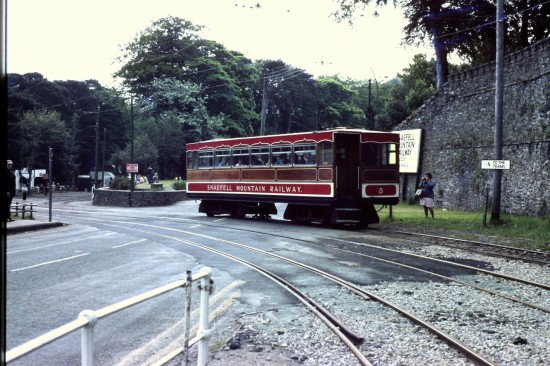