In Pictures: Llandudno & Colwyn Bay 7 ends the year on a high

2019 has seen Llandudno & Colwyn Bay Electric Railway 7 undergo some attention – or its trailer at any rate – having given 12 years faithful service since being cosmetically restored for the centenary of the tramway opening in 2007 but with this now completed the tram – and its regular transport partner, the Matador lorry – made two final appearances for the year earlier this month, including an unplanned test run.

As you may recall 7 has been restored for public appearances in the local area, although it is very much a “trailer” arrangement with the restoration not including either the electrical equipment or for that matter a tramway in the area! It was first unveiled in 2007, a year it was a very close runner-up in the British Trams Online Tram of the Year to Blackpool Brush 623 (by a single vote!), and has since made several appearances each year mainly around North Wales but also made it to Birkenhead for the Bus and Tram Show in its launch year. These appearances had taken their toll so the summer saw the underneath of the trailer on which the tram is mounted having some attention to allow no. 7 to continue its public appearances.

The work was completed in time for no. 7 to first off appear at the Llandudno Christmas Parade on Saturday 6th December. And then if this wasn’t enough the chance was taken to take no. 7 out again a week later when it went for a test run.

The next planned outing for the tram will be the Llandudno Victory and Victoria Weekend from Friday 8th to Sunday 10th May 2020. 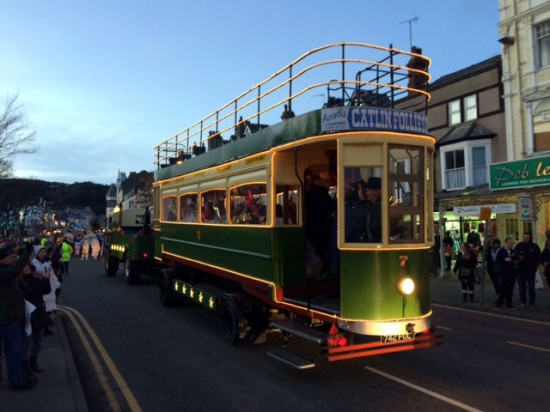 During the Llandudno Christmas Parade on 6th December 7 is seen on Mostyn Street. (Photograph by Andy Scarratt)