Tyne and Wear Metro continues to have problems

Posted on Monday 11 November 2019 by Gareth Prior

The next performance poster of the Tyne and Wear Metro is likely to be fairly interesting as there remains fairly regular service disruption, if their own Twitter feed is in anyway accurate.

Cancelled services – especially the additional peak services due to run each day – seem to have been the norm in recent days with failed trains often seeming to be the issue. This is despite extra funding being put towards the regular maintenance of the trains but it really does seem that their age is really starting to catch-up with them considering they are still the originals constructed for the opening of the line between 1978 and 1981. There may be new trains on the horizon – although who will win the contract to do so is embroiled in local controversy with local builder Hitachi rumoured to have been unsuccessful leading to complaints about jobs in the local community – but it is looking like their arrival can’t come soon enough.

Another oft mentioned problem is the old “leaves on the line” or to give it the official name “rail head adhesion” issues. The Tyne and Wear Metro runs through many areas where there are plenty of trees which means during the autumn the leaves fall causing the rails to become slippery and thus causing delays. Metro do own three battery locomotives which have in the past been employed on Rail Head Treatment Trains but in 2019 these have not been noted out on the network although it isn’t known if that means they aren’t running or if they just sneak out when no-one is looking!

Whatever the reasons for the disruption it is becoming an all too regular occurrence and commuters on the Metro are continuing to suffer as they try to go about their daily business. 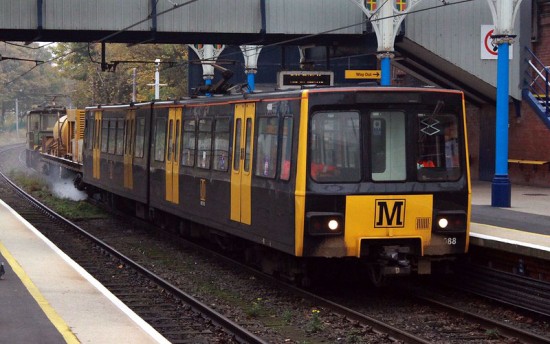 RHTT have run in the past on the Tyne and Wear Metro and haven’t always used the battery locomotives. In this view taken on 4th November 2015 4088 is leading the RHTT through Whitley Bay with loco BL2 bringing up the rear. Whether any such workings have run in 2019 is unknown. (Photograph by Trevor Hall)