Posted on Saturday 23 February 2013 by Gareth Prior

It is just two weeks until the 2013 operating season on the Manx Electric Railway officially commences (if you ignore the bus strike services last month) and this year looks like being a good year for the line as it will be celebrating its 120th anniversary with a celebratory day on Saturday 7th September.

Saturday 9th March will be the first day of the main operating season of the MER with timetable A due to be in operation. This will see four departures from Derby Castle, Douglas at 0940, 1110, 1240 and 1440 with return journeys from Ramsey at 1110, 1240, 1440 and 1610. This timetable will remain in operation over the first two weekends of service and will also be in use during the first midweek services between Tuesday 19th and Thursday 21st March. Timetable C will then take over from Saturday 23rd March for a fortnight until Sunday 7th April which sees nine return journeys between Douglas and Ramsey plus a Laxey-Douglas service in the morning and a Douglas-Laxey journey in the evening.

The remainder of April will see services running Wednesday-Sunday each week using timetable B (seven journeys in each direction) before a daily service commences from Wednesday 1st May and will carry on until the end of the first week of October. A variety of different timetables will be in operation during these five months with the most intensive service (timetable F) used between Saturday 1st and Friday 7th June during the TT races. Evening services will be in operation on most Wednesdays and Fridays from mid June until the end of August (and then Fridays only on the first three Fridays in September). The 2013 season is due to end on Sunday 3rd November.

As 2013 is the 120th anniversary of the line it is planned to have a special event on Saturday 7th September although at the moment no further details have been revealed as
to what this will entail. In addition the annual Manx Heritage Transport Festival takes place between Wednesday 24th and Sunday 28th July with the return of the Winter Photography event on Saturday 2nd November. And 2013 will also see our most comprehensive coverage ever from the Isle of Man (although not necessarily of these special events so if you happen to attend any do not hesitate to contact us with any news and photos!)

* The full timetable for the 2013 season on the Manx Electric Railway is available to view
at http://www.gov.im/lib/docs/publictransport/Timetables/rail/mertimetable.pdf 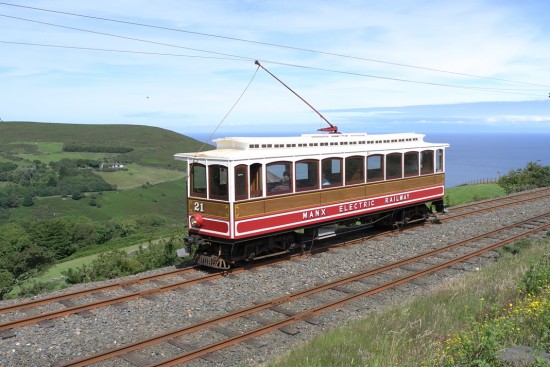