Today’s main edition of Picture in Time is back at Crich for another look at the 1973 Transport Extravaganza with another tram featured which is no longer part of the operational fleet – Sheffield 264.

Sheffield 264 (one of two trams in preservation to retain this number) was built in 1937 and was retained as part of the operational fleet on its home system until the very last day of service on 8th October 1960 when obviously it was withdrawn from service. Purchased privately by an enthusiast the tram remained at Queen’s Road Depot where it was a stable mate of many other trams which would end up at Crich with it arriving on site in Derbyshire in December 1960. It was to a further 10 years before it would run at Crich after restoration with it first featuring in service at that year’s Transport Extravaganza. It would remain operational until 1980 when withdrawal came and it has remained a static exhibit since. It can today be found in the Great Exhibition Hall.

This photo shows 264 in action at the Extravaganza of three years later with the tram heading up the line past the quarry. Note the lack of fence between tramway and quarry! 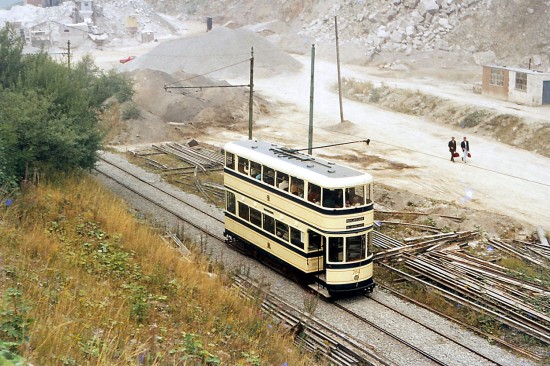