In the second of our special Picture in Time article we again take a look today at Blackpool Standard 143 in the early days of its extensive restoration.

Restoration on 143 started in earnest in 2005 and work made progress with the aim of the tram being ready for the 125th anniversary in 2010 but despite the tram returning to Rigby Road for this to happen it wasn’t possible with it restricted to display only at the Depot Open Day during those celebrations. Another move was on the cards in April 2012 when it was back to Brinwell Road but this was just a brief stay as a return to Rigby Road followed in October 2013 – and that’s when its nomadic life ended! Work on its restoration has been ongoing for the last couple of years and despite a few delays it has finally been finished – some 14 years since the work really started.

This photo shows the tram in 2007 with the tram having been stripped for work to start leaving just the lower deck structure. OMO 8 sits alongside. 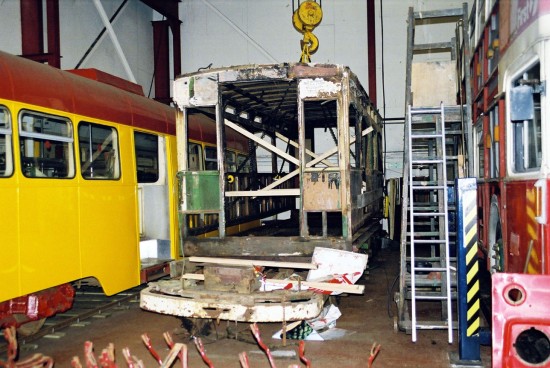