Posted on Thursday 19 September 2019 by Gareth Prior

Another trip to Crich for this latest edition of Picture in Time as we take a look at the 1973 Grand Transport Extravaganza.

In the early days of the tramway museum at Crich it was synonymous with an annual Transport Extravanagaza with attracted thousands of visitors each year in August. One such event was in 1973 and is that event which the following photo of two Glasgow trams was taken. The two trams in question are 1100 (on the left) and 1297, neither of which are currently part of the operational fleet at Crich.

1100 was built as part of a batch of trams in 1928/29 and underwent rebuilding during its career in Glasgow but did manage survive operational until the end of the tramway in 1962 (although it had been earmarked for withdrawal some 13 years earlier). It was the last tram to leave the car works in 1964 and after arrival was prepared for service and was part of the operational fleet between 1965 and 1976. At this point it was withdrawn from service requiring work before it could run again but it never reached the top of the queue and was a static exhibit at Crich until it was one of three trams to be transferred to Clay Cross in 2005, and that is exactly where the tram is some 14 years later.

The second tram in this shot is 1297 which, although it has operated longer at Crich plus visits to Blackpool and the Glasgow Garden Festival, is also currently not operational. The tram entered service in 1948 in its home city before withdrawal at the end of the tramway and then transfer to Crich, arriving in July 1963. It had to wait until 1969 for its first passenger use in Derbyshire but was an almost constant in service until 1989 (except for some workshop attention) and also paid a visit to Blackpool in 1985 and the Glasgow Garden Festival in 1988. Returning to service briefly in 2006 and 2007 it was then withdrawn again and can now be found in the Great Exhibition Hall just waiting for a chance for it to pass through the workshops again which would be complicated by asbestos covered wires and cables still present in the tram.

But in this photo taken on 25th August 1973 it was a much happier time for both trams as they are seen at a much less developed Crich. 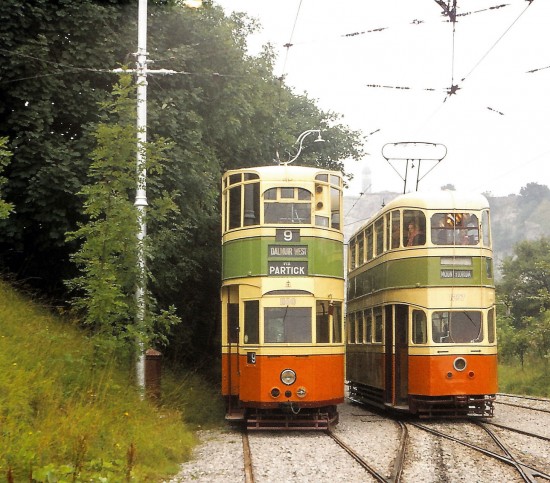