Posted on Thursday 11 July 2019 by Gareth Prior

Another image from Crich features in this edition of Picture in Time as we head back nearly 47 years for a view of a tram which has a different identity today.

The tram in this photo is Vienna 4225 which is now better known as New York 3rd Avenue 674 and is part of the static fleet at Crich but in August 1972 it was operational having been first used in service two years previously. Built in 1939 for the New York 3rd Avenue system as 674 the tram was exported to Vienna following World War II where it was renumbered 4225. It remained in service in Austria until 1969 when withdrawal came and it was presented to Crich where it arrived in April 1970. It ran as 4225 until 1975 and then again in 1977 and 1978 before 1979 saw it return to New York condition. The tram was used in service until 1985 when withdrawal came and it has been a static exhibit ever since.

In this photo we see 4225 stabled just as Glasgow 812 passes heading up the line. 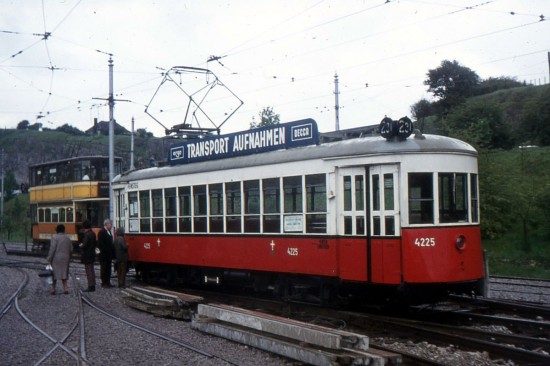