2012 has been another highly succesful year for the Heaton Park Tramway, despite being less eventful than the last few years. However, with a new addition to the running fleet, and the long-awaited commencement of ground works for the new depot at Lakeside, this has been a significant year for this heritage tramway and its vehicles, and this article aims to review the fortunes of the tram collection over the past 12 months.

For many people, the tramway’s high point of 2012 – and arguably one of the tram highlights of the year anywhere – was the entry into service of Blackpool Brush Railcoach 623 right at the beginning of the year.  The tram was launched on 22nd January, duly becoming the first Blackpool Brush car to run in passenger service away from Blackpool (although of course sister car 630 followed at Crich just a few months later). Since then 623 has been used very regularly and has fitted in perfectly at the park, proving very useful and popular, particularly in bad weather. Before entering service the tram underwent some minor work, including the fitting of a smaller tower and trolley, complete with rope, whilst its appearance was improved greatly by the fitting of black and white destination blinds from a member’s own private collection. During the year 623 has undergone vital weatherproofing work and is now operating the winter service on the tramway.

Stockport 5 also enjoyed its busiest year for quite some time, running most weekends until late October, when it was withdrawn to receive some remedial work in preparation for a planned visit to Beamish Museum in spring 2013. 5‘s open top deck has made this tram a firm favourite with visitors to the park, and the increased passenger numbers witnessed this year are partly attributed to its arrival. The running fleet was completed by Manchester 765 which was probably the least frequently used of the available trio, but has remained popular whenever it appeared. This was was also withdrawn for some much-needed workshop attention at the end of October, although with work on 5 being prioritised the tram currently remains untouched, and this has allowed it to make a few midwinter appearances.

The ex-Blackpool Vanguard car 7 has also been on site throughout 2012, but has been boarded up in outside storage due to lack of space inside the existing depot. 7 has remained operational, latterly being used as a works car to assist with track laying and construction works at Lakeside, but has not carried passengers all year. Once the new depot is complete this tram will be returned to a more respectable appearance and it should be back in regular use next summer.

Of course, the MTMS collection remains spread across several locations. Two trams which are housed undercover and on display to the public, both originating from Manchester, are Eades horse car L53 and open-top electric car 173, which are housed at the Bury Transport Museum and the Greater Manchester Museum of Transport respectively. Neither car is expected to move to the park in the immediate future, as getting more vulnerable trams into covered accomodation is understandably considered more important. Also remaining on loan during 2012 was Leeds 6, which has been at Beamish Museum since April 2010. Sadly for much of its stay, 6 has been stored outside which has not helped its condition, although had it returned to Manchester it would not have faced any better prospects. In fact, the MTMS are very grateful to Beamish Museum for looking after the tram for so long, as by staying there it has at least been kept on a fairly secure ‘closed site’ and remained operational, seeing occasional use throughout the year.

Other MTMS trams in open storage are three further Blackpool cars – Balloons 702 and 708, and Railgrinder 752, all of which remain at Bury. Hopefully this trio will move to the park in 2013 although all are expected to require some attention before they can run, with 702 thought to be the most likely to run again in the near future as it was purchased as a runner in 2010. Finally, Blackpool Ex-Towing car 680 remains hidden from view at Blackpool’s own Rigby Road depot, with its new owners paying a modest rent fee for its continued storage there. Whilst not an ideal situation, this has allowed 680 to avoid enduring any outdoor storage, and a few shunt moves have proven that it is still capable of moving around under its own power. When the new Heaton Park depot opens early next year, 680 is expected to be the first ‘new’ tram to join the fleet and provisional plans for a launch event on 24th March have already been announced.

So, as 2012 becomes 2013, the UK’s only true preserved tramway can look forward to another year of positive developments, which could well be its most exciting yet! 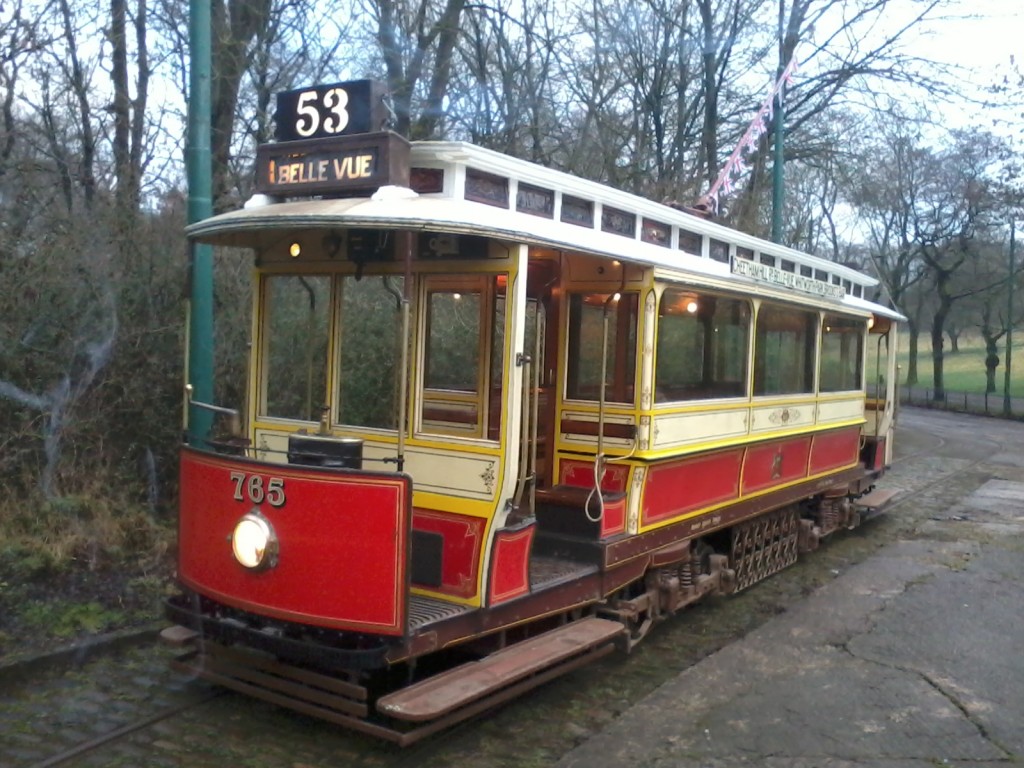 Manchester 765 has been somewhat upstaged by newer arrivals at Heaton Park of late, but is still considered the MTMS flagship car by many. Here it is seen standing outside the current depot during a work party in December 2012. (Photo by Joe Savage)