Posted on Tuesday 19 March 2019 by Gareth Prior

We stay in 1983 for this week’s archive image from Blackpool and this time we feature a couple of the iconic Balloon Cars.

The location of this photo is Cabin with the two trams captured on film during the October of 1983. The tram at the front of this image is Balloon 723 which seems to be operating a special through to Pleasure Beach as it pulls forward towards the stop. The tram is in the standard 1970s Green and Cream fleet livery including Corporation crests below the fleet number on each side and it also features side adverts for CIS Insurance. 723 is still under trolley operation and has roof windows.

Also in this image we see another unidentified Balloon Car which is operating a scheduled service – with route card 14 seen in the windscreen – through to Starr Gate. 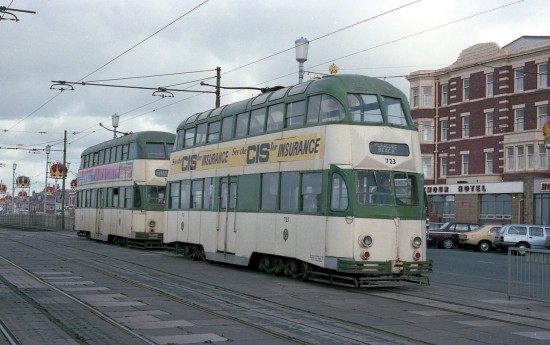