Posted on Saturday 16 March 2019 by Gareth Prior

Another all over advert carried on one of the trams of Croydon Tramlink in the early days of the system features as the latest image in Picture in Time today.

2546 was the third of the CR4000s to be adorned with advertising vinyls with a design for the Whitgift Shopping Centre in early 1999. This was, of course, before the system had opened so the advert could be seen whilst the tram was being used for testing and driver familirisation in the lead up to the opening. In this view we see the tram turning the corner into the bottom of Tamworth Street working a route 2 service to Beckenham Junction. Also of note in this photo is a Messchersmitt car parked in the bus stop on the right. The date is 5th June 2000. 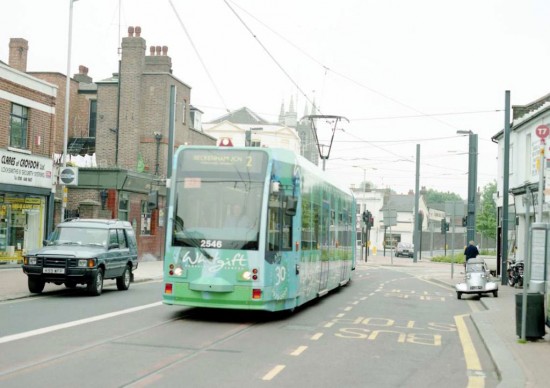