Moving forward a bit this week with an image from Croydon dated shortly before the start of public services.

The tram included in this photo is 2552 – the penultimate of the Bombardier built CR4000 trams which arrived in Croydon on 24th May 1999 – and it is shown running along Church Street blinded for a route 1 tram to Wimbledon, although the date of 13th April 2000 was over a month before public services would actually begin. When they did eventually begin all trams to Wimbledon came from Elmers End – as of course they do again now! – and this section of line pictured here is part of the single track Croydon Town Centre loop. Judging by the pedestrians turning and looking at the tram you can tell that it is still a relatively new phenomenon to see a tram running through the narrow streets of the town centre. 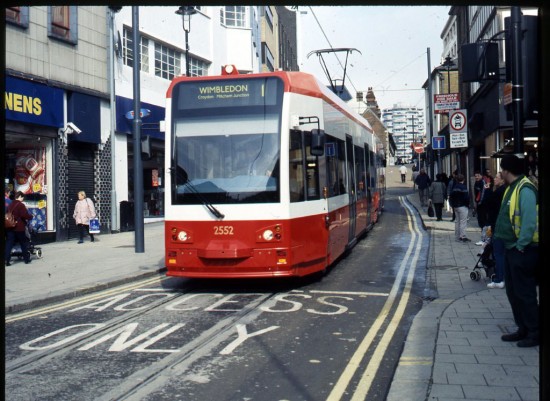