In Pictures: Overhead poles start to be installed in Blackpool

Despite the fact that it will be some time before trams will be using the extension of the Blackpool Tramway up Talbot Road to Blackpool North Railway Station work is still pressing ahead with the parts of the project which can be developed. The past week has seen the start of overhead pole installation whilst progress is also starting on the single platform stop in Talbot Square itself.

With the tracks now connected between the extension and the Promenade tramway attention is turning away from trackwork towards other aspects of the infrastructure. Of course a major component of this will need to the overhead and to this end poles are starting to be put in place up Talbot Road to allow the wires to be strung at some point in the future. With no trams expected to run on this line for some time it remains to be seen whether the overhead is put in place at this point or if they wait until the full line is in place.

The extension will also see a single platform stop constructed in Talbot Square. This will be just for trams heading towards the railway station providing better access for the town centre. 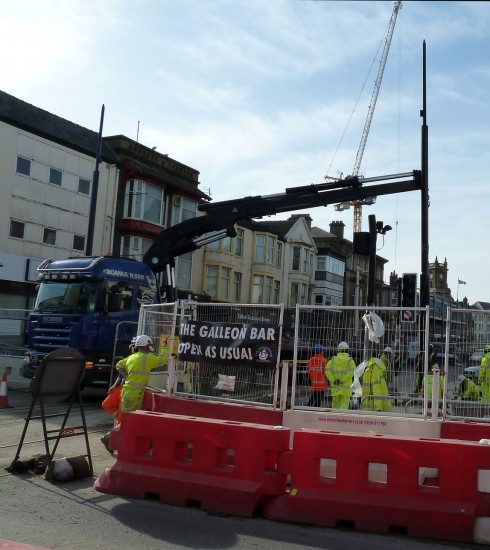 A crane is in use here to lift the new poles into place at the junction of Abingdon Street and Talbot Road. (Photograph by Peter Dockerty, 22nd February 2019)

2 Responses to In Pictures: Overhead poles start to be installed in Blackpool