Posted on Monday 18 February 2019 by Gareth Prior

Thursday 14th March 2019 will be a significant day for the future of Edinburgh Trams. It will be on that day that councillors from the City of Edinburgh Council meet to decide on whether to press ahead with plans to extend the line along Leith Walk to Newhaven – based on the results of the Final Business Case. Councillors have been given access to this in a special room before it is made public to help them reach their decision but, and let’s be honest about this, most had probably already made up their minds before seeing the document as opinions on major projects such as this are already pretty much entrenched based on previous experience and political persuasion.

In a recent series of articles in the Edinburgh Evening News both sides of the political spectrum have given their opinions. On the “For” side were Leader and Deputy Leader of the Council (SNP and Labour) whilst the “Against” opinion was put forward by a representative from the Scottish Conservatives. It is not our place to repeat in depth their comments as we have already covered the main arguments previously but they can be read online:

It is likely that the next month or so will include plenty of claim and counter claim as we wait to see whether Edinburgh does get a bigger tram system or not. 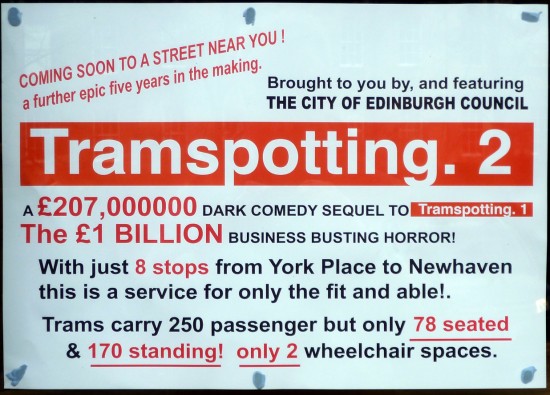 Not everyone is keen on the extension as can be seen from this poster in the window of a café on Leith Walk. So far there doesn’t seem to have been a concerted anti-tram campaign but this one seems to be targeting how accessible the tram will be for locals. (Photograph by Roy Calderwood)

1 Response to Countdown to decision day for Edinburgh Trams continues