Posted on Monday 18 February 2019 by Gareth Prior

If you cast your minds back a few years you may remember that when the T68 and T68As were disposed of by Manchester Metrolink one such vehicle was acquired by the Greater Manchester Fire and Rescue Service for use in training exercises. Now, some four years since it left Metrolink metals for the last time, 1003 has been used for that very purpose in a multi-agency training exercise.

The exercise took place at the Greater Manchester Fire and Rescue Service’s Training and Safety Centre in Hinds Lane, Bury on 15th February 2019 and saw firefighters, fire officers, the Greater Manchester Police, North West Ambulance Service, Transport for Greater Manchester, Manchester Metrolink and Bury Council convene to work together. The scenario offered was that an HGV had collided with a tram resulting in a collision involving several vehicles leaving a number of people injured and some deceased. To further complicate matters the HGV was carrying unknown chemicals and the tram also caught fire with people trapped in the tram.

Explaining more about the scenario, Group Manager Tony Bryan, resilience manager at GMFRS, said: “The exercise gave us the opportunity to deal with a serious tram incident. This was a complex scenario which gave us the chance to put our skills and knowledge to the test, working with our partners who we deal with at real incidents. The incident scenario was in the city centre during peak time with concerts, football matches and much more going on, which provided us with lots of real-life challenges, such as roads being gridlocked due to a power outage in the area because of the collision – resulting in traffic lights not working. With the help and support of our partner agencies the exercise was a success for all. It’s crucial to keep refreshing our learning and training to develop and enhance the current skills of colleagues. GMFRS volunteers did a fantastic job, as always, acting as casualties and making the scenario seem as real as possible for crews involved, and thanks also to the Salvation Army who provided our staff with refreshments during the exercise.”

Danny Vaughan, Transport for Greater Manchester’s Head of Metrolink, added: “Light rail is an extremely safe mode of transport, however accidents can and do occur, as demonstrated by the tragic events at Croydon, which underline the importance of having well-rehearsed emergency processes in place to protect our passengers and the public. By working in partnership with emergency services and other agencies and utilising the fantastic GMFRS training facilities available at Bury, we are able to put our contingency plans to the test, ensuring they are as robust and effective as possible.”

1003 retains its advert livery applied shortly before withdrawn for the Imperial War Museum North. This livery also included the more modern Yellow and Silver colours on the ends. Sadly since withdrawal this livery has suffered graffiti but considering it has now been used to simulate an accident that hardly seems the worst thing which has happened to the tram! For completeness 1003 last ran in service on 5th November 2013, was formally withdrawn a week later and left Manchester Metrolink on 11th April 2015. Unlike the other T68s though this involved a trip under its own power to the East Lancashire Railway in Bury before it was later moved to the Greater Manchester Fire and Rescue Service facility in Bury. 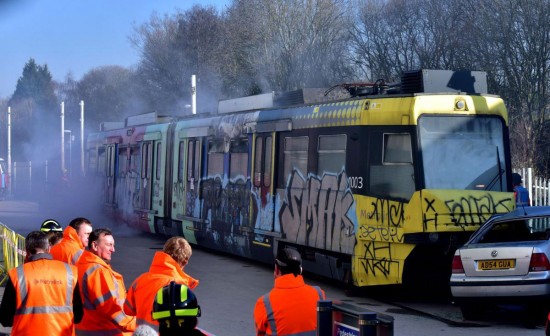 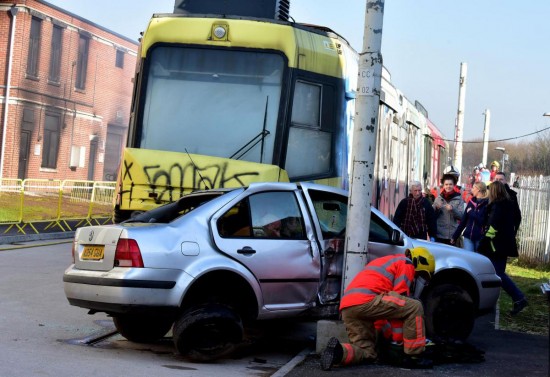 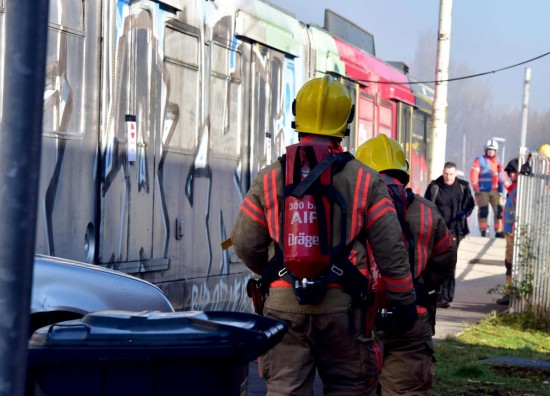 Firefighters head towards the tram. 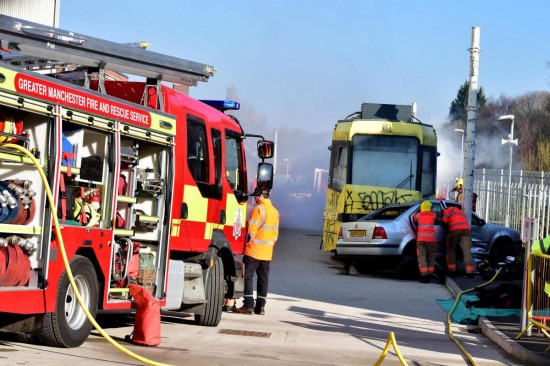 A general view of the scene. (All Photographs by David Lloyd)