Posted on Tuesday 29 January 2019 by Gareth Prior

After a couple of weeks of “sorry we don’t know what the trams are” we are back to being able to identify the trams in this weeks Blackpool Picture in Time image. They are Jubilee 761 and Balloon 707.

This photo was taken in either 1979 or 1980 and shows the relatively new Jubilee 761 alongside Balloon 707 on Blackpool Promenade. The Balloon Car is in an all over advert for The 3 Piers (that’s North, Central and South in case you weren’t aware) which was this tram’s second ever all over advert and unlike many adverts nowadays featured many bright colours publicising the attractions on each of the piers. 707 is probably heading to Pleasure Beach but a twisted blind means that Manchester (from Manchester Square) is also show in the destination aperture.

The Jubilee Car alongside was only introduced into service during 1979 and is still in original condition including the standard fleet livery and Corporation crests above the destination blind. And speaking of the destination blind the tram is heading along to Bispham. 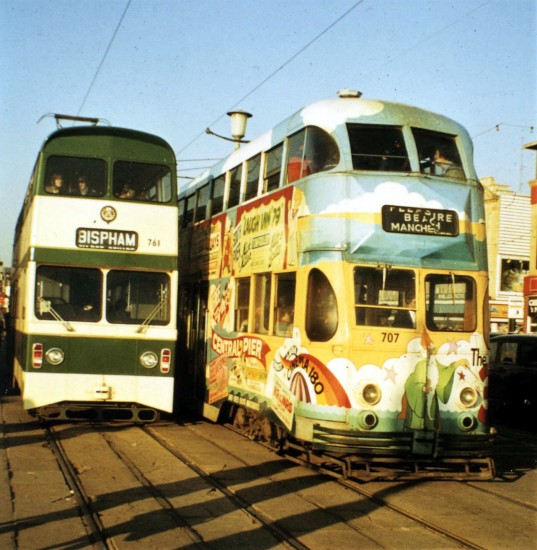