Picture in Time: Blackpool Tramway from the Tower bridge

The only bridge to have gone over the Promenade tramway in Blackpool was that close to the Tower which, although considered an eyesore for many, gave some different photographic opportunities of the tram. As we return to our archive photo series it is that very bridge that we feature with a couple of images taken in 1975 with both Balloon Cars and OMO Cars running on the tramway.

The Tower overbridge provided a safe crossing for visitors to the resort with it crossing not only the tramway but also the Promenade road which as can be seen here was at the time a dual carriageway with many vehicles on the period travelling along the road. Illuminations are in place over the road, the Tower has a frontage very much of the period and the familiar Prom buildings of this time can be seen including the Lewis’ building just beyond the Tower. This viewpoint remained in situ until it was finally demolished in 2009 as the Prom redevelopment works ramped up.

In the first photo below we can see no fewer than seven trams – four Balloons and three OMOs – with three different liveries featuring on those trams with not a pantograph in sight! Judging by the between decks advert on the leading Balloon Car this is 1975 and if that date is correct this means that the first Balloon is either 717 or 722 as it still had twin destination blinds and seems to be a second series Balloon. It is immediately followed by a Plum and Custard liveried OMO car complete with roof advert boxes and then another Balloon Car – this time with single destination screen. On the northbound track we see another Balloon on a special to Cabin and then a Red and White OMO. In the far distance at North Pier we can also see another OMO (Plum and Custard liveried again) and yet another Balloon Car on the crossover. 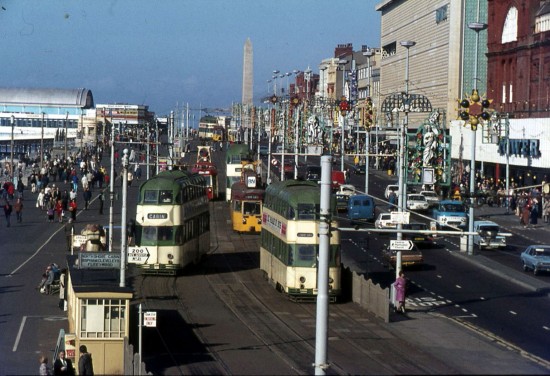 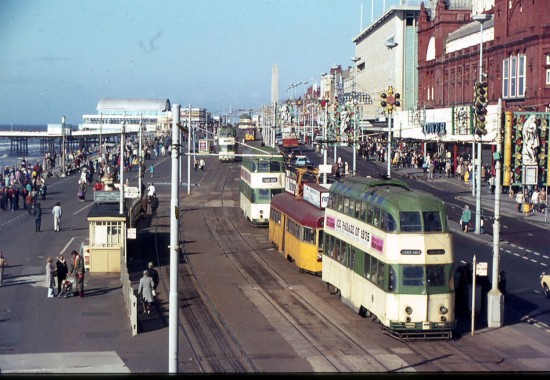 Both Photographs by Peter Gough