Posted on Thursday 3 January 2019 by Gareth Prior

A call to undertake more development work on a plan to extend the Blackpool Tramway to Lytham has been made by the Trams to Lytham group with backing given to the project from Blackpool Transport. A new report has just been released on the proposal which seeks to convince local authorities that the proposal would be “hugely beneficial to the local community”. The proposals don’t currently have the backing of the local authorities representing the Lytham and St Anne’s areas but Blackpool Transport have come out in support of the plans which remain at a very early stage with no funding made available to develop further.

The main proposal of Trams to Lytham is that the current South Fylde rail line is connected to the Blackpool Tramway close to the Pleasure Beach rail station with just a short section of connecting street track needed. This would be likely to leave the current tramway near to Pleasure Beach. Trams would then run on the South Fylde line as far as St Anne’s where it is proposed the train service would be terminated. Between there and Lytham both trams and trains would run alongside each other but completely separately. Trams stops would be provided at Pleasure Beach South, Harrowside, Squires Gate, Coastal Dunes, Highbury Road, St Leonard’s Road, St Anne’s (interchange with rail services), St Thomas’ Road, Clifton Hospital, Ansdell and Fairhaven (interchange with rail services), Blackpool Road, Lytham (interchange with rail services) and Saltcotes Road where the tram would terminate.

These plans have both advantages and disadvantages for passengers and is the main option being considered by the campaign group as it is considered to be the best available. It would also enable possible phased construction which may help to convince some funding bodies of its feasibility. On the minus side it would mean that through journeys from beyond Lytham into south Blackpool would no longer be possible without the change of mode. These proposals also seem to suggest that the current rail terminus at Blackpool South would not be required with this section of line presumably being closed – and having to go through the lengthy closure procedures in place for any section of rail line.

Despite those negatives the proposals show that there is a willingness from some sections to try and do something about the service on the South Fylde line for the benefit of passengers.

Speaking about the report, Sam Flynn, Lead Campaigner of Trams for Lytham, said: “Extending the Tramway to Lytham would provide an integrated, modern transport system for the Fylde Coast. Linking the popular network and its five million annual passengers to the underutilised South Fylde Line will solve many of the issues facing the area. It will bring a reliable and more frequent service that the inadequate route desperately needs. Travelling between Blackpool and South Fylde is difficult and lengthy, and neither the hourly train service nor the often-unreliable buses are satisfactory. There are only two major roads between them, so congestion is a huge issue. An alternative corridor is sorely needed, and this solution would provide it with direct links to the Town Centre, Enterprise Zone and other key areas. There would be a lot more stops for thousands of residents and a more accessible service for disabled people. It’s a much more well-balanced option than simply increasing the number of trains on the line. Our lengthy report highlights these important issues and why this project needs more consideration by councils. It’s a hugely popular idea and has the support of over 3,000 petition signatures as well as many influential local people, and our campaign was highly commended at the 2018 Global Light Rail Awards. Light rail has been a revolution in towns and cities worldwide in recent decades, and the Fylde shouldn’t miss out on its huge potential.”

Interestingly the report seems also to have been backed by Blackpool Transport with Managing Director Jane Cole saying: “Investment in Public Transport infrastructure is a necessary precursor to persuading people out of their cars, and making the switch to more environmentally friendly and sustainable methods of travel. The latest iteration of the Blackpool Tramway, our Flexity 2 service, has been running since April 2012, and the current works in the Talbot Road area of Blackpool will see that Tramway extended to Blackpool North station in the near future. Combined with regular outings for our much-loved and expanding heritage fleet of traditional Blackpool trams, we now have 130 years’ experience of operating trams on the Fylde Coast. We know they are effective people-movers, they’ve got a very respectable carbon footprint, locals and visitors love them, and they make money! It therefore makes absolute sense to continue to be ambitious in terms of extending the tramway, as we also continue to invest in our now 92-strong fleet of Palladium buses, which serve Blackpool and the wider Fylde Coast. The excellent report by Trams to Lytham makes clear the scale of the ambition, and the scale of the challenge (not least in terms of identifying finance), but this should encourage ambition rather than suppress it, and I wholeheartedly welcome their work.”

The report will now be submitted to local authorities and stakeholders for their consideration. 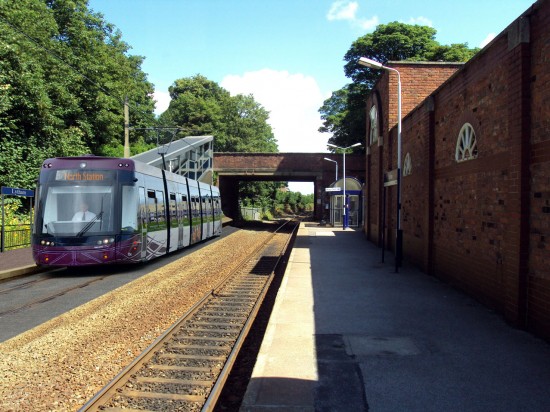 An artists impression of a Flexity2 tram at Lytham. (Image courtesy of Trams to Lytham)

4 Responses to Calls again to extend Blackpool Tramway to Lytham