There are ambitious plans on the Channel Island of Guernsey to run a heritage tram service and restore some original trams to operate it. Roy Perry, who has been trying to raise interest in the project for a number of years, takes British Trams Online through the project and some history on Guernsey trams…

The Guernsey Museum and Art Gallery and Heritage Service is the custodian of an enormous number of documents and relics, many of which have never been on public display. One of these is the partly restored body of a Tramcar. Another is a fabulous collection of scale model trams and trailers. Will they ever see the light of day again?

In January 1897 there was a bit of a fuss at the docks in St Peter Port, Guernsey. The latest modern tramcar trailer had arrived from Liverpool on a steamship. Normally this vessel would have docked at St Sampson’s harbour where the new trailer could have been craned off onto the railway tracks that ran along South Side. The ship on the run this time did not have a flat bottom and had to discharge at St Peter Port. It sailed into the harbour at high tide and a large gang of workmen were assembled to assist in offloading before the tide started to fall. They were successful and Guernsey Railway Co Tramcar trailer No 3 took to the metals which ran between the seaports on the east coast of the Island. So began the career of a passenger transport vehicle whose body is still substantially intact in the year 2004.

Now a serious attempt is to be made to return this car to the rails along a stretch of the original route. A Trust is to be set up to achieve this and also to act as a focal point for the rescue of any examples of our Industrial Heritage that are still extant. Archivists have records of some of these but lack the funds for their recovery.

The first tram service in the island started in 1879 and consisted of Steam Tram locos hauling passenger trailers. It was introduced to carry workers to the quarries of the north; clerks and shop assistants to the capital in the south. Long before this time metal and stone plateways were used but steam power had only been used for stationary pumps, engines and stone crushers. In 1892 Sieman s Bros. of London successfully electrified the line. This in itself was a major achievement since it was the first street tramway in the British Isles to be supplied with current from an overhead wire. (Apart from an experimental line in Leeds.) It was also startling because a public supply of electricity was not to be installed for another ten years. 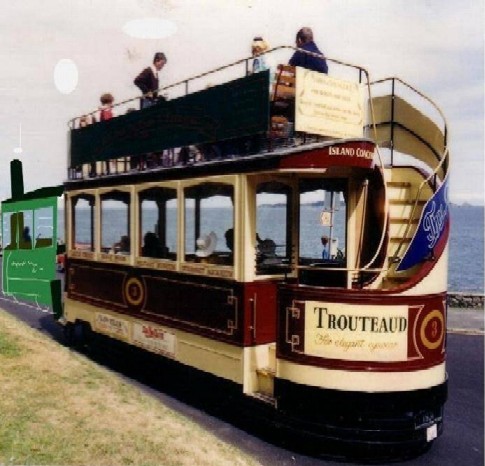 When it entered service Car No.3 was towed by a powered tram, sometimes with a second trailer attached. The Electricity supply was not particularly reliable and one of the remaining Merryweather steam tram locos had to provide the motive power. This engine carried the name ‘Shooting Star’.

End of the line

The tramway ceased to operate in July 1934 just a month after a feature article had appeared in The Railway Magazine. All the running gear was sold for scrap and the bodies disposed of for £5 each as garden sheds and summerhouses. 6 of the bodies were known to have survived the German Occupation from 1940 – 1945 and two are still extant today. Tram No. 3, which was electrified in 1901, was rescued by members of The Guernsey Old Car Club in 1976. It had seen use as a summerhouse and had been protected by a tarpaulin roof and placed on stone supports. Although covered entirely with ivy the body was lifted out and placed on a trailer. There it stayed for a number of years whilst a small band of volunteers tackled the task of renovation. In 1980, with a new roof, sides and staircase ends, the trailer was motorised and it moved once more under it own power, albeit with an under floor internal combustion engine and a steerable road chassis. It retraced its route to the northern port on Liberation Day (May 9th) that year, and then continued to circumnavigate the whole island.

Meanwhile the Club learnt that another tram body was about to be destroyed. This was in use as a battery store at a west coast garage. Two members, assisted by British Rail, took this former Cardiff Horse Trailer apart and conveyed it into storage.

Shortage of funds and enthusiastic helpers meant that Tram No. 3 was donated to The States of Guernsey and Trailer 17 to a private collector. The remains have been in store for more than 20 years with no more restoration work done. Now an ambitious plan has been proposed by the former Old Car Club Chairman.

There are many artefacts in Guernsey which have been donated to or acquired by the Museum and Heritage committee. There is an extreme paucity of suitable storage for these valuable items. The new proposal is to establish an Industrial Heritage Trust and build aCentre on the original tramway track, at the northern end of Belle Greve Bay. Facilities would include a two road shed with adjacent workshop. Behind this it is planned to erect a long, wide glassed roof gallery to display Pictures, memorabilia and a working scale model of the tramway. Further rooms are assigned for storage and renovation of small items. Above this will be a restaurant with stunning sea views. Accommodation for a Curator and café operator is also planned. Standard gauge track panels will be laid on the old bed alongside the sea wall. It is hoped that a replica of Tram No 3, constructed by a local bus operator in 1992 can be brought back to the island to convey passengers, especially those who are elderly or disabled, from St Peter Port to the site. This replica is currently located in Derbyshire and is in excellent condition. In April 2004 it was put on the market and there is a plan to make it the highlight of the celebration of the 60th anniversary of Liberation from Axis Occupation of the Island. A reduction in the purchase price has been negotiated and the Liberation Cavalcade Committee e has offered to pay for the costs of bringing the vehicle back to the Island. Some funds have already been pledged but a further £8000 is needed.

Restoration of the original tram bodies, to non-electric condition, will probably have to be carried out in the UK. An application for funds for this work could be made to The Heritage Lottery Fund as soon as a UK restoration site is selected. It may be possible to interest a UK Museum in order to obtain volunteer help. Both the National Museum at Crich and the Beamish Heritage Centre have offered advice but regrettably have too many of their own projects.

Finance for construction of the centre will have to come from private sources. When completed the centre could be lease-purchased by The States of Guernsey on whose land it will stand. Track laying and operation would follow after this. Its potential as a tourist attraction is enormous, especially since it is adjacent to major roads, on the seafront and can be viewed from the decks of the many cruise ships which visit the island each year. The final jewel in the crown of this restoration project will be the construction or lease of a replica Merryweather Steam Tram Loco. This could be based on a Wickham 4 wheel gang motor trolley such as may be seen on The Alderney Railway. Prior to this the trailer could be cable-hauled.

The first step in this project has to be the establishment of a Trust to administer any funds collected. A management committee would determine the aims and there must be connections to other bodies operating in this field. Care must be taken to co-ordinate our efforts with those of The States of Guernsey Departments, The Guernsey National Trust La Societe d’Guernesiase etc. A Patron should be sought, perhaps a celebrity or successful entrepreneur with an interest in the subject.