With preparations continuing for the 125th anniversary of the Manx Electric Railway the most high profile work is on Ratchet Car 14 which will re-enter service during the week long event. Following on from its public debut during the recent Manx Heritage Transport Festival 14 has now gone on a road trip – but don’t worry it hasn’t left the line as it as just transport a short distance to turn the car around.

With the Manx Electric Railway not having any way to turn trams on the line a low loader had to be hired to perform the move which took place on Monday 30th July, the day after the conclusion of the 2018 Transport Festival.

As you may recall several years ago a number of trams – including 14 – left MER metals for storage at Homefield Bus Garage before they were returned. For 14 this meant it was away from the tracks between 2002 and 2009 and upon its return to the MER it was delivered the wrong way around, something which hadn’t been rectified previously. The move now means that the switches are at the Douglas end of the car.

Attention will now continue on completing the full restoration of 14 – including full test running – before it is officially launched during the 125th Anniversary week at the very start of September; just a mere month away now! It is scheduled to be launched on Monday 3rd September and is then due to see further use on other days of the event. A full preview of the celebrations can be viewed here. 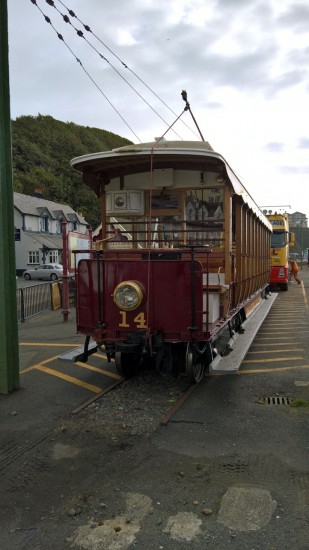 At the very end of the line at Derby Castle 14 waits to be loaded. Note the car has now been painted and looks absolutely stunning! 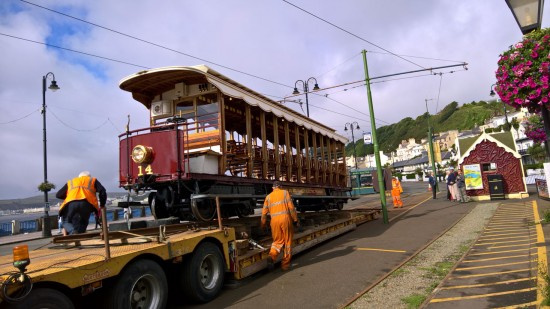 14 on the low loader ready for turning. 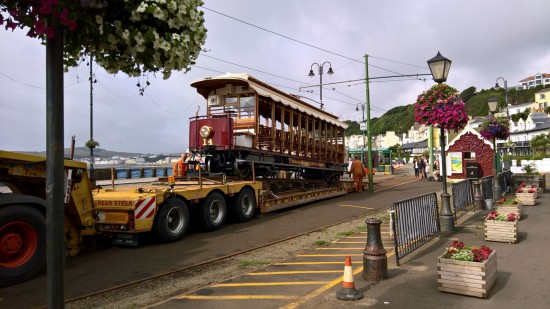