Posted on Saturday 24 February 2018 by Gareth Prior

A trip back in time to 2001 for today’s Picture in Time as we take a look at one of the original T69 trams which operated on Midland Metro.

This view shows 02 as it nears Kendrick Park whilst working from Wolverhampton St George’s to Birmingham Snow Hill on 3rd August 2001. As would probably be expected 02 was the second of the T69s to be delivered from Italy to Wednesbury Depot with it arriving in the West Midlands on 12th May 1998. With delays to the start of services it was to over a year later that 02 would enter service with it used on the line from the end of May 1999 and it remained in service for just over ten years before withdrawal. It was the second tram to arrive in the West Midlands, number 02 in the fleet and this symmetry continued with it becoming the second to be withdrawn with this taking place in December 2009. It remained stored at the depot for almost five years before it was moved for storage at Long Marston on 7th October 2014 – its connection to the number two was ended though as it was third to leave! It has recently been confirmed that the tram has been sold for scrap. 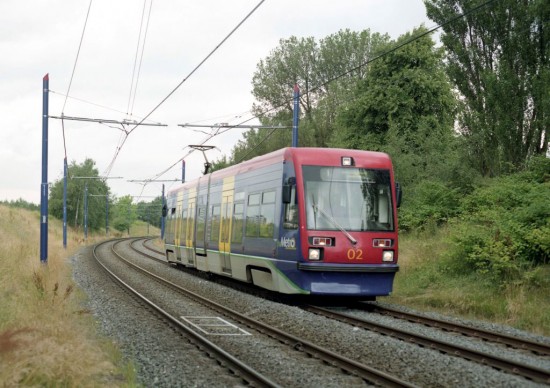