Posted on Thursday 22 February 2018 by Gareth Prior

In this instalment of Picture in Time we are back on the Fylde Coast with an image of one of Blackpool’s iconic Balloon Cars as it operates on the streets of Fleetwood.

The tram in question is 713 which was the first of the second batch of double deck trams built by English Electric, and the first of the trams to be fully enclosed. Delivered to Blackpool on 10th December 1934 it took just five days for the tram – at that point numbered 250 – to enter service. Becoming an early convert to single indicators in 1955. Fast forwarding to today and 713 remains operational having been converted with the widened entrances for use on the upgraded tramway although most use nowadays is on heritage tours.

This view shows 713 at the start of a southbound journey as it runs along Lord Street, Fleetwood with a service to Pleasure Beach. This image was taken in 1987 at a time when 713 retained its trolley (pantograph operation was still four years away) and it has a T side advert for the Cannon and Ball show at the Opera House, at a time when comedy stars of the day could pack out the 3,000 seat auditorium for a full summer season. 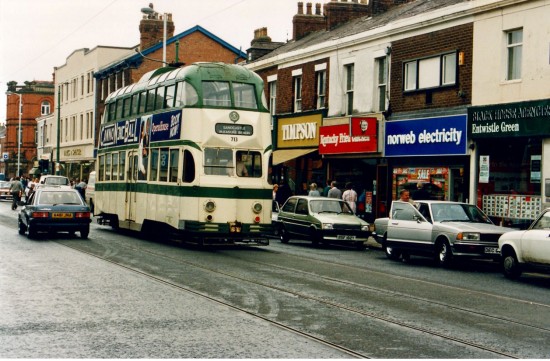