Around the World in Trams: Bratislava 7102

Posted on Tuesday 20 February 2018 by Gareth Prior

Moving back into Europe for this week’s image from overseas as we visit Bratislava the capital city of Slovakia.

The system in Bratislava is a metre gauge network which has 200 trams operating from two depots. Trams in the fleet include Tatra T3 and T6A5s usually running in pairs, 37 K2S articulated trams rebuilt by Pars Nova (Skoda) from earlier Tatra K2 trams, 30 Skoda 29T For City Plus single ended cars and 30 Skoda 30T For City Plus bi-directional trams; the latter two classes which were added in 2015/16.

In the below photo we show Rebuilt Tatra K2S 7102 on Jesensekho in the city centre. It is carrying the revised all over red livery and there can be no debate that this is definitely a Bratislava tram! 7102 was caught on camera on 16th May 2012. 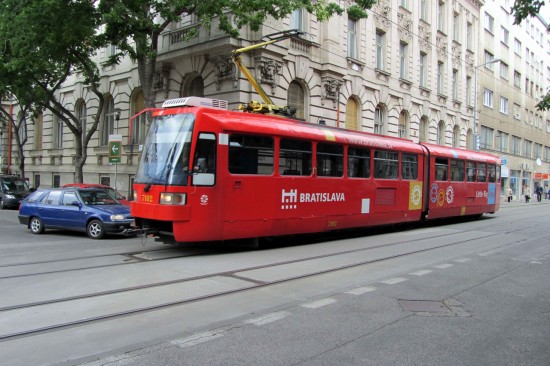