Posted on Sunday 3 December 2017 by Gareth Prior

The second in this series is probably the least successful tram loan of the past 15 years – that of Oporto 273.

The loan of Oporto 273 to Blackpool (from Crich) was not originally scheduled to happen. However, after problems were experienced with transporting Johannesburg 60 for the 125th anniversary it was a late replacement and arrived in Blackpool on 16th August 2010. Unfortunately things didn’t go according to plan and after some training runs it derailed at Pleasure Beach on 7th September. After this it was decided to withdraw the tram from any use whilst in Blackpool and it didn’t carry any passengers during its visit to the seaside. It was displayed at the depot open day though. With its unsuccessful loan over it returned to Crich on 4th October 2010. 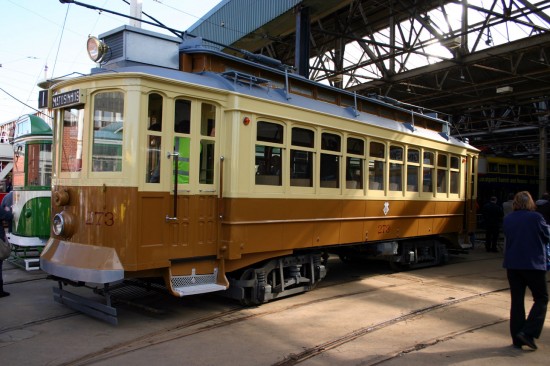 Because of its problems photos of 273 in action in Blackpool are fairly limited. Instead we see it on 26th September 2010 during an open day at Rigby Road Depot. Two other loan trams can just be seen alongside – Blackpool Pantograph 167 and Blackpool Marton 31. (Photograph by Gareth Prior)