Posted on Saturday 25 November 2017 by Gareth Prior

Making its debut in the Picture in Time series in this edition we travel to Dublin for an image taken during 2004 of one of the Alstom Citadis trams, before they were lengthened.

This is 3003 one of the original order of 26 Alstom Citadis 301 trams built in La Rochelle for operation on the Red line. With only three sections – as opposed to the five section Citadis 301s originally built for the Green line – capacity of these trams was only 256 (as opposed to 358). As a result in 2007-8 all 26 trams received two extra sections to bring the fleet up to a standard size.

In this view we see 3003 at Heuston stop with a service running from Connolly to Tallaght on 5th October 2004. 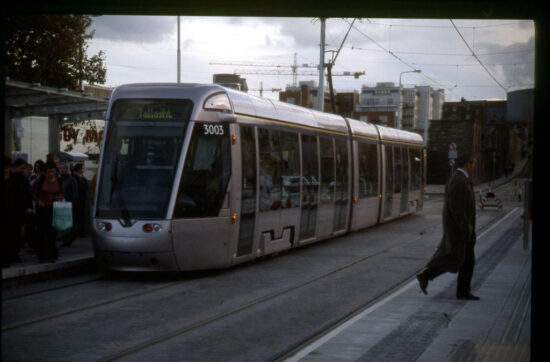