Posted on Thursday 23 November 2017 by Gareth Prior

With the 80th anniversary year of the Blackpool Brush Railcoach starting to come to an end we take a look at another of the surviving class members in our latest delve into the archives. This time around we land in 2004 for a view of 625.

Entering service on the penultimate day of July 1937 as 288 this tram followed the fairly standard Brush Car history spending most of its early years based at Bispham Depot for use on the North Station route until this closed when it made its new home at Rigby Road where it remained until withdrawal and departure for a new life. A major claim to fame of 288 is that it became the first Brush Car to receive a single destination indicator in November 1957 but conversely it was one of the last to lose its trolley in favour of a pantograph during June 1991. Remaining in service until the major mothballing of trams at the end of the 2004 season 625, as it had been renumbered in 1968, was kept stored at Rigby Road until December 2011. At this point it left on the back of a low loader for what was hoped to a brighter future having been acquired by Merseytravel for the Wirral Waters scheme but with this being abandoned there was an uncertain future for 625. However in June 2015 the tram returned to the Fylde Coast where it found a home with the Fleetwood Heritage Leisure Trust’s trams at Wyre Docks. Now owned by a private individual 625’s life came full circle in June 2017 when it returned to Rigby Road Depot for further storage alongside Balloon 726.

On 7th September 2004 Brush 625 pauses on the centre track at Cabin when working specials – the destination blind is already changed for a return trip to Pleasure Beach. The tram is carrying the livery it still carries to this day, green and cream fleet livery with extensive adverts for Pricebusters. 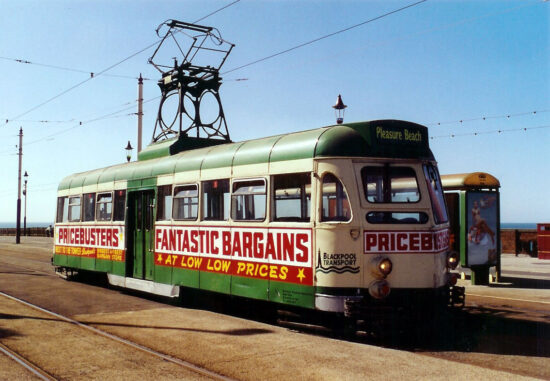