Posted on Saturday 18 November 2017 by Gareth Prior

The last of the original T68 trams to be delivered to Manchester is the main feature of this edition of Picture in Time. It is 1026 and we catch up with the tram in 2005.

1026 was delivered to Manchester on 9th April 1992 and after commissioning and testing entered service on 26th May 1992. It spent time away at Wolverton Works in 2006 for refurbishment but probably its main claim to fame is that (along with 1018) it made a rare foray for a T68 onto the South Manchester Line on 23rd January 2011 when the trams ran as a pair to St Werburgh’s Road on test. It was withdrawn on 2nd December 2013 and had managed to amass the highest mileage of all the T68s. 1026 left Manchester on 25th July 2014 but was not destined for the scrapman as it was transferred to Long Marston for further storage on behalf of UK Tram.

This photo shows 1026 leaving Victoria through the “hole in the wall” on 2nd April 2005 whilst operating a Bury to Piccadilly service. 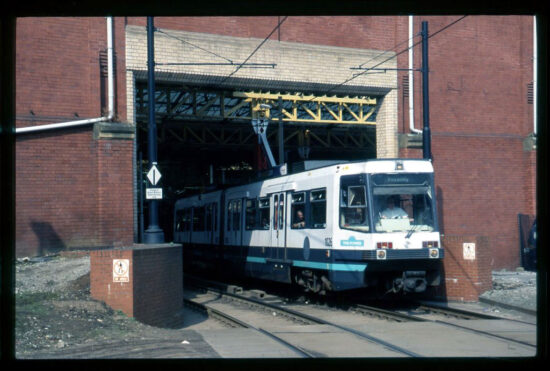