Posted on Monday 6 November 2017 by Gareth Prior

Another of those it is a railway or is it a tramway conundrums is the line which runs along the UK’s longest pier at Southend. Still running to this day with more modern rolling stock the feature of this article is the remains of a vehicle which was built in 1949 and was later converted for engineering use.

This vehicle was one of the trains built for the line in 1949 by AC Cars of Thames Ditton, Surrey and it operated on the then 3’6” gauge line until 1978 when it was closed because of the deterioration and need for repairs. This was the last time that the line was to run on electric power as by the time it was reopened in 1986 it had been converted to diesel operation with the gauge also further reduced to 3’.

This particular vehicle can now be found at the Mangapps Railway Museum where it is now a service car although the date of when this conversion took place is unknown. 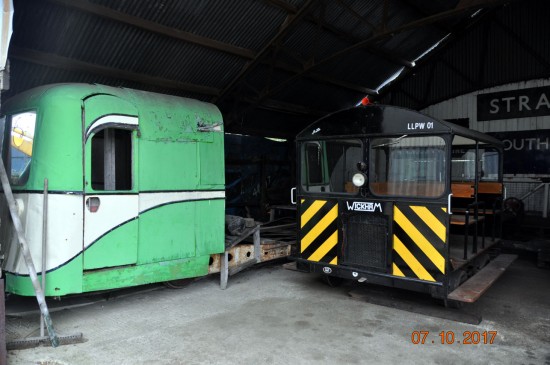 The Southend Pier Railway vehicle is seen to the left of this photo tucked away, again making photography difficult. (Photograph by Ken Jones)

This entry was posted in Southend Pier Railway/Tramway. Bookmark the permalink.