Picture in Time: A view inside Rigby Road Depot

Posted on Thursday 3 August 2017 by Gareth Prior

Today we take a peek inside Rigby Road Depot once again to see what treasures we can find as part of the Picture in Time series.

This photo was taken on 12th September 2004 during a depot open day held to celebrate the 70th anniversary of the English Electric streamlined trams and it is rather apt that in the image we see mostly trams which originated in the Preston works of that company. This is very much the withdrawn tram corner of the depot with Balloon 717 seen stored at the very back of the depot before it was admitted to the workshops for its heritage restoration. Then on the right we can just see OMO 8 at the rear of a queue of trams, Balloon 716 (also withdrawn and never to run in Blackpool again following its withdrawal) and Works Brush 259 (which stops the English Electric theme dead in its tracks). Just visible in front of the Brush Car is the Railcrane 260. The more eagle eyed of you may also notice on the left we can just about see Brush Cars 621 (Hot Ice advert) and 623 (Mystique advert). Of all these trams only Balloon 716 – sold to a firm in Perth and now scrapped – can not be found at Rigby Road again (although for 623 its just a temporary trip home on loan from the Heaton Park Tramway). 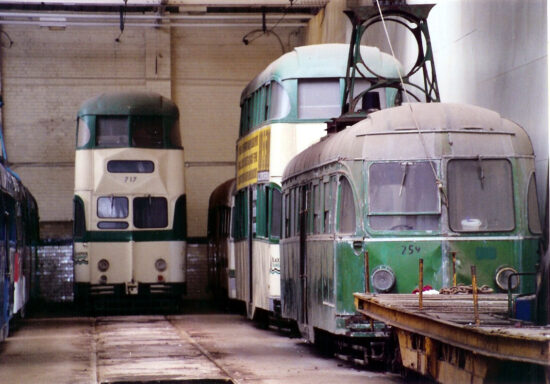