Posted on Saturday 28 January 2017 by Gareth Prior

Off to the West Midlands for this edition of Picture in Time as we take a look at one of the original T69 trams which operated on Midland Metro.

The tram in question is no. 12 which arrived at Wednesbury Depot on 16th October 1998 and continued as part of the operational fleet until January 2015 at which point it joined the ever increasing ranks of the stored fleet at the depot. It remained stored there until 23rd March 2016 when it was collected by a low loader and transported to Long Marston where it remains stored today.

In this view we see 12 just after it has left St Pauls and is now approaching the end of its journey from Wolverhampton to St Georges to the old Birmingham Snow Hill terminus. The date is 3rd August 2001. 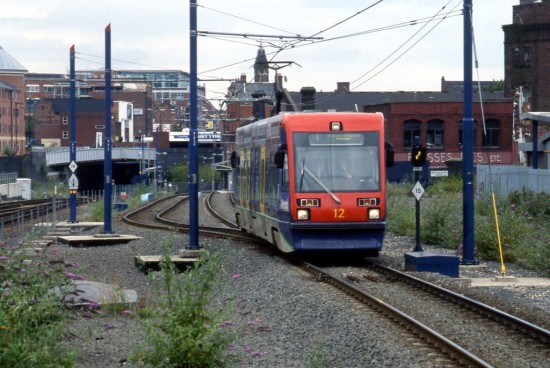