Posted on Thursday 15 December 2016 by Gareth Prior

Our latest instalment of Picture in Time is once again in Blackpool and the tram we feature is the last built of the iconic Balloon Cars – 726.

Although we have previously included 726 in this series of archive photos we haven’t seen the tram carrying its last all over advert – an advert it still carries today in outside storage in Fleetwood. Which is rather appropriate as it is in Fleetwood that we actually see the tram as it approaches the loading stop at Fleetwood Ferry on the Esplanade on 21st September 2009. By this time 726 had been carrying this attractive advert livery for HM Coastguard for two years and as mentioned above would retain it until its final withdrawal at the end of the 2010 season. Since the upgrading of the tramway 726 has been sold and is now stored at Wyre Dock along with the trams of the Fleetwood Heritage Leisure although it is in the ownership of a private individual. 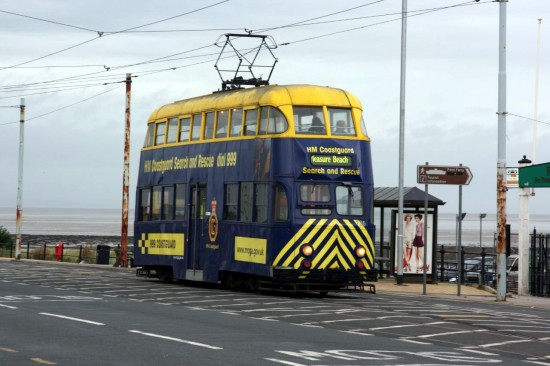