On 7th July 2015 Manx Electric Railway trailer 58 of 1904 was involved in a serious derailment at Laxey which had led many at the time to suggest it may never be repaired and that it would join the ranks of the withdrawn trams on the MER. Fast forward to less than a year later and 58 has returned to service being pressed into use during the TT event although this is just a temporary return for now.

The derailment of 58 occurred at Dumbells Row and saw the tram leave the rails during a routine shunting move. The derailment was severe enough for the tram to topple over and it had to be returned to the rails with the help of a crane. A subsequent investigation showed that the derailment happened as staff had not followed the correct operating procedures. 58 was initially transferred to Laxey Car Sheds before a decision was made that it was feasible to return the tram to service with the work being undertaken at Derby Castle.

In addition to the accident repairs necessary the opportunity has also been undertaken to overhaul the bodywork which has included a full repaint into its original livery from 1904. Although there are still a number of small jobs required to complete the overhaul the busy TT period saw the tram called into action on Mad Sunday when an intensive tram service operates. It was partnered with Crossbench car 32 throughout the day. In total on this day 12 car sets were in use (11 operating as motor and trailer and one as solo motor).

58 will now see its overhaul completed before it makes a full return to service later this year.

Thanks to Manx Electric Railway.co.uk for the information and photo contained in this article. 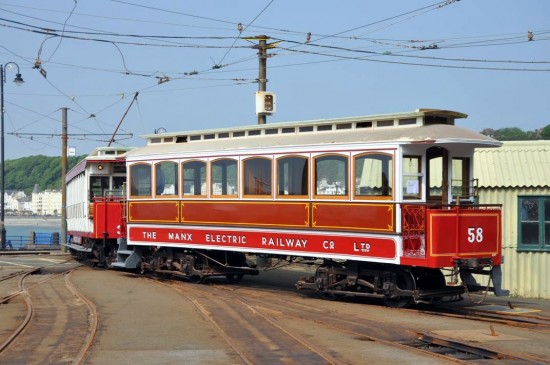 58 is hauled out of Derby Castle yard by Crossbench 32 on a warm and sunny Sunday 5th June. (Photo courtesy of Manx Electric Railway.co.uk)