Posted on Wednesday 30 March 2016 by Gareth Prior

The Picture in Time machine ends up in Blackpool again for our latest image with the year being 1974 and the tram Brush Railcoach 622.

This view is taken outside Rigby Road Depot on 5th September 1974 and shows 622 waiting for its next duty with both destination blinds set for Manchester Square following its previous use. The tram is carrying the Half Green/Half Cream livery with Orange trolley tower.

Built as 285 in 1937 the tram entered service during late July with key milestones in its career seeing the fitting of single indicators in 1975 and then 622 received a pantograph during 1991. But probably its biggest “claim to fame” was when it became the first single deck tram in Blackpool to ever receive an all over advert when it was painted in the iconic Tigeriffic livery for Blackpool Zoo in 1975 (a design it kept until 1980). Withdrawn from service at the end of the 2009 season the tram was never officially preserved (joining the LTT collections as a source of spare parts) and can now be found at Anchorsholme Academy where it once again carries the Tigeriffic livery. 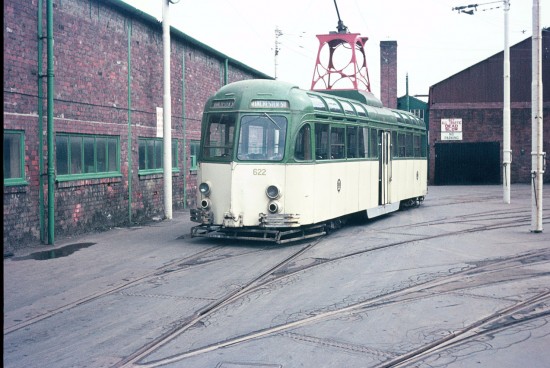