Posted on Wednesday 10 February 2016 by Gareth Prior

We head back into the 1950s for the latest Picture in Time instalment and we feature a tram which is sadly no longer with us – Liverpool 166.

Liverpool 166 was built by the Corporation’s own workshops in 1937 as one of batch of 38 trams known officially as Bogie Streamliner Cars – a type still represented in preservation by 869 at the Crich Tramway Village (albeit 869 is from an earlier construction batch). The majority of the Bogie Streamliner Cars remained in service until the closure of the last routes of Liverpool Corporation Tramways in September 1957.

This view – taken at some point in the 1950s – was captured by Danish photographer Palle Gabriel during a visit to the UK and shows 166 whilst working on a route 19 service (which ran from Pier Head to Kirkby). 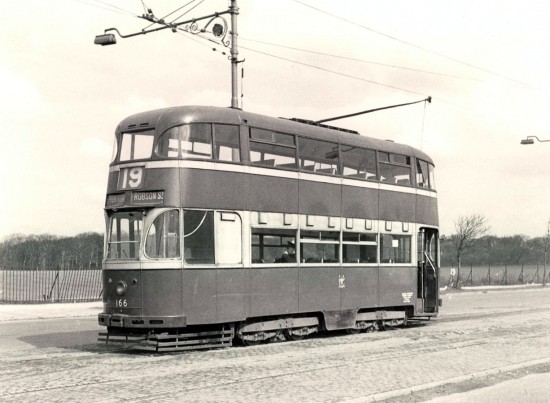 4 Responses to Picture in Time: Liverpool 166