A new look for the illuminated Trawler

Trawler 737 may not be the most striking of Blackpool’s famous illuminated trams, but the tram looks set to become much more eye-catching thanks to a makeover funded by Lofthouses, whose Fisherman’s Friend brand has been advertised on the car since it debuted in 2001. The Trawler is of course based on the iconic brand logo and it is pleasing that its sponsors are continuing to support the tram as their contribution to both the annual ‘lights’ spectacle and the heritage tram fleet.

The local company have long been supporters of the illuminated trams; the creation of the Trawler followed the withdrawal of Western Train 733+734 in 1999, although their long-running contract on this tram was briefly transferred to the Hovertram 735. Since 2001 the Trawler, created from the remains of withdrawn Brush car 633, became an important part of the fleet and a popular car for illumination tour duties every autumn. Having received no significant attention since being built, 737 had become very shabby and was rested during 2015. Now, following discussions between Blackpool Transport, the Blackpool Heritage Trust and Lofthouses, the tram is in the works for a makeover which should allow it to resume tour duties during 2016.

The main change will see all of the tram’s external illuminations replaced, and it will receive new ‘state of the art’ lighting effects which should look very impressive! 737 is currently in the Paint Shop where it is being fully repainted before the lighting features are added later on; these are being produced by the Blackpool illuminations department, making this project a real team effort. Some mechanical work is also being carried out and finally, the multi-coloured seat cushions will be replaced by more traditional leaf green moquette, in a nod to the tram’s Brush car origins.

Whilst the Trawler may not have been the first choice for workshop attention with some enthusiasts, for the general public this is fantastic news. There can be no doubt that the illuminated trams are a huge attraction in their own right, and although other older trams are popular when used on tours of the lights, for many people – particularly with young children – there really is no substitute for one of the illuminated cars! Naturally the commercial aspects of the operation will ultimately determine how much finance is available for other projects, and so the refurbishment of the Trawler will almost certainly be a very positive development for the heritage fleet as a whole. 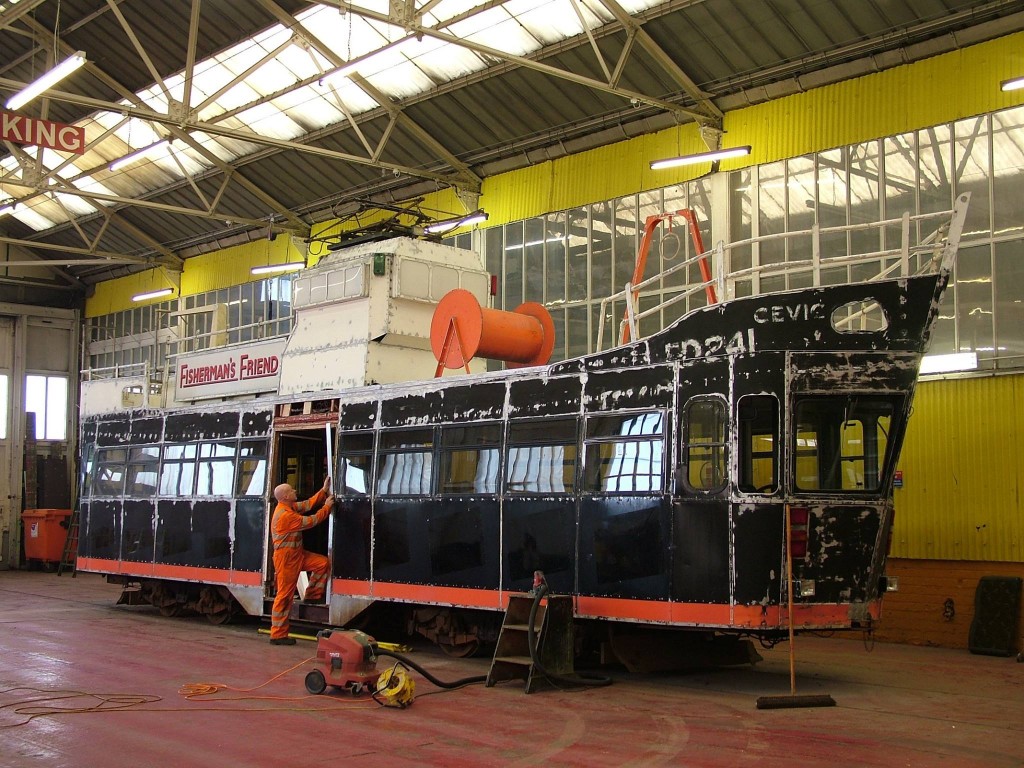 Trawler 737 in its original guise but minus its 'sea wave' skirts and most of its external light fittings, is seen in the Paint Shop in the early stages of its make-over. (Photo courtesy of Blackpool Heritage Tram Tours)

4 Responses to A new look for the illuminated Trawler