Posted on Sunday 13 December 2015 by Gareth Prior

We are off to Croydon for today’s Picture in Time image which shows 2537 on the town centre loop ahead of the public opening of the system.

This photo shows 2537 pausing at the yet to be completed stop of George Street on 8th October 1999. This stop is located deep in the heart of Croydon town centre and is on the single tracked town centre loop. Trams operate one way here due to the narrow streets in the town centre meant it would not be possible to have double track. The large store to the left of the stop was Allders at this time – and for many years previously – and was considered an institution in the town but has since closed. As for the tram itself 2537 was delivered to Croydon on 18th January 1999 and entered service at the start of services in 2000. At this time it was in the original fleet livery of red and white and today can be found in service running in the revised fleet livery of lime green, white and blue. 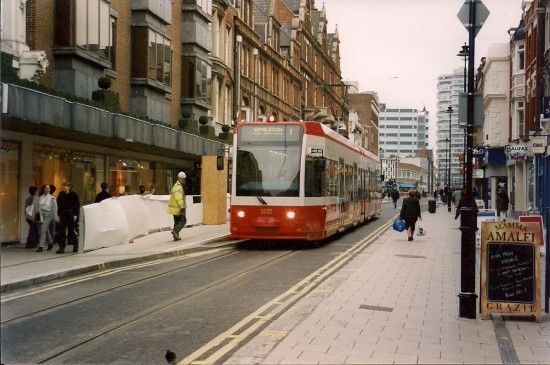 One Response to Picture in Time: Croydon Tramlink 2537