Posted on Thursday 5 November 2015 by Gareth Prior

And as the bonfires are lit and the Christmas adverts start traditional tram operation starts to draw to a close for another year. Yes there will be Santa Specials and a few locations continue with regular operation throughout the winter but this weekend will see the true end of the 2015 operating season. Blackpool (with an enhanced green timetable running) and the Manx Electric Railway run normal services for the last time this year which will just leave us with Beamish, Birkenhead, Black Country Living Museum, Heaton Park and Summerlee to see us through the winter. But more on that next week; in the meantime read on to find out when and where you can enjoy a ride on a traditional tram over the next week or so… 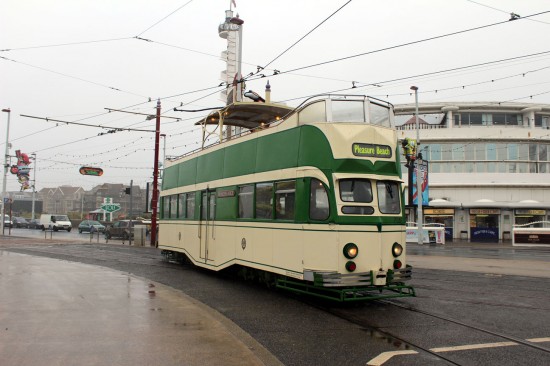 Princess Alice arrives at Pleasure Beach in rather inclement weather on 20th June 2015. This weekend will (hopefully) be the last chance to ride on the tram for a while with it due to be withdrawn at the end of this season. (Photograph by Gareth Prior)